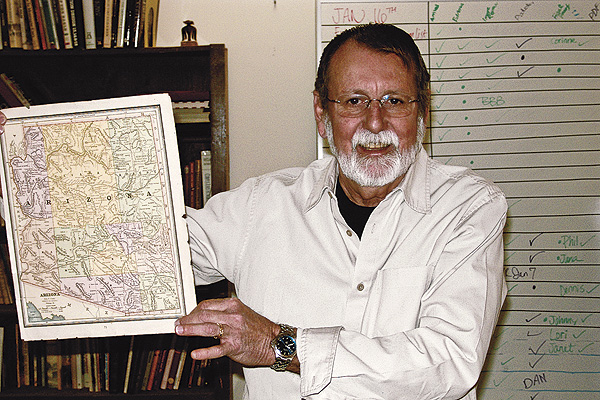 We called him the “Mapinator,” and for good reason.

Gus could take the most complicated history—whether it was the 1893 Doolin-Dalton Gang gunfight in Ingalls, Oklahoma, or a Renegade Roads adventure—and boil the facts down to the essentials. He did so all while retaining the compelling imagery and clarity of vision that were the hallmarks of a Mapinator map.

As an example, check out the locator map (top right) for Mattie Earp’s grave. Marvel at all the site information, presented cleanly and simply. To get a full taste of Gus’s accomplishment, Google a map of the Superior, Arizona, area to see how complicated it is in its raw form. Then add to that the knowledge of history required to determine places no longer represented on modern maps.

In addition to being a talented coworker, Gus is remembered by all of us here at True West Magazine as a gentle soul and a great friend. Gus, who came to us after 38 years at The Arizona Republic, was also respected in the national media. Here’s Dave Walker, of The Times-Picayune in New Orleans: “Gus was the nicest guy who ever lived and brilliant at his work. It was so cool he got a third professional act, and a wide following, at True West. Thanks for that.”

Our editor, Meghan Saar, put it best: “I can’t imagine True West without Gus. Our family is not the same without him.”

Visit TWMag.com for a slideshow of more Gus Walker images.