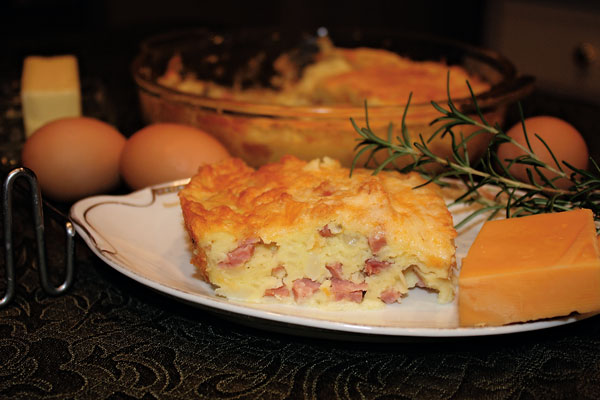 “All the cookin’ o’ course was done at the fireplace….  Later, when we got pigs, father smoked ham an’ bacon for the winter. First after the hogs was killed, he’d make a heavy salt brine, then he’d rinse the hams

an’ sides in that, an’ then he’d build a fire on the ground o’ the smoke house an’ hang the hams an’ sides over it…,” remembered Sarah Byrd, who  had moved with her family from Iowa to Oregon in 1848.

Ham, a food staple that’s been around for centuries, is nothing more than smoked pork. Because it could be smoked or salted, it lasted for quite a long time and was an invaluable staple as the pioneers made their way West and while they lived on the frontier.

Today we tend to think of Easter when we think of ham, but in the late 1800s, ham was a common meal in homes. Anna Potter Davis, who moved from Kansas to New Mexico in 1898, recalled, “The old-fashioned Sunday dinner was wonderful. Sometimes two or three families would drive in on Sunday and remain for dinner…. And if we were going to have a Virginia baked ham, that was usually baked the day before too.”

Arkansas newspaperman J.T.  Trezevant’s desire for what he considered the staples of his job brought down the wrath of another newspaper. Trezevant started the Augusta Bulletin in Augusta,  Arkansas, in 1871, and Little Rock’s Daily Republican wrote, “…J.T. Trezevant, who is, we believe, a carpet-bagger from Tennessee…has the impudence to propose to the citizens of Woodruff that they should donate him ‘a handsome town lot….a choice ham, a bushel or two of yams…a basket or less  of champagne, sherry, or claret….’”

It concluded, “The difference between the editor of the Augusta Bulletin and other carpet-baggers probably is, that  while their weakness is for money, his is for ham and old Bourbon….”

Ham was so popular, it was frequently stolen. In the summer of 1895, four boys in Denver just couldn’t help themselves—well, actually they did. They stole a ham and were found sitting in an alley near 16th Street dining on their ill-gotten booty. They were each given 60 days in jail by
the judge!

The next theft occurred in Minneapolis in April 1898 when restaurateur F.A. Francis saw a man leaving his restaurant with a ham. Francis grabbed his revolver and fired at the fleeing thief. He recovered his ham when his bullet cut the string attached to the ham. Not content with just getting his ham back, he took another shot at the thief—he missed, and the thief got away.

Back in Denver, Warren Burnell, James Coogan and Oscar Thompson were sentenced to 30 days in jail for stealing hams from Abe Goodman in 1899. They had sold them to saloonkeeper James Meskew, who was accused of buying stolen property.

Whether stolen or bought, ham was smoked, baked, broiled, boiled and served, sliced, on sandwiches and in a variety of other ways. Try your hand at this potato and ham recipe.

Peel, cut and boil the potatoes. Drain, then mash them and add the butter. Add the ham and taste before adding salt and pepper. Add the eggs, place in an oven-proof dish, sprinkle with grated cheese and bake in a 350˚ oven for 20 minutes or until golden.