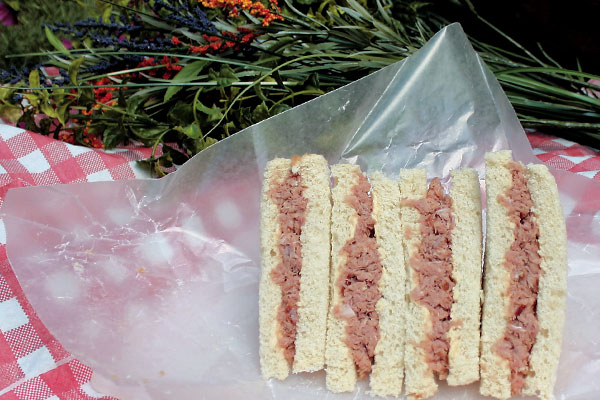 In the mid-1800s, the word sandwich was almost synonymous with ham. If you ordered a sandwich, it was likely ham. The other two options were tongue and corned beef—all with mustard. A variety of lunch meat was not an option, and sandwiches did not become a mainstay noonday meal until around the turn of the 20th century.

Pioneer miners, schoolchildren and picnickers dined on sandwiches, but these were hardly the same as the ones Victorian ladies ate in those days. Their dainty tea sandwiches were often mayonnaise-based, since those could stay cold, but the travelers’ sandwiches had to hold their own while folks headed to their destinations, so these contained mustard or oil.  In 1876, the San Francisco Bulletin ran an ad for potted meats, which were “…adapted for travelers and overland passengers, for Lunches.”

Even gamblers at saloons snacked on sandwiches. Saloon owner Bud Brown remembered rancher Clay Mann devouring sandwiches while on a winning streak in Colorado City, Texas, in the late 1800s: “The time was about 1 p.m. when Clay and Bob [Winders] began to play monte, and Clay played steadily ’til 12 o’clock without stopping…. Several times he went out for sandwiches and munched while playing. He would occasionally send for a drink from the bar.”

Alabama native and former Texas Ranger William Blevins also lived in Colorado City, in the
mid-1880s, and he recalled a cowhand friend named Buck Jones ordering a “hotdog sandwich” in town. Jones told him, “I tasted the mustard, onion and bread, but didn’t get that taste of the dog. I looked inside the bun and could not see any signs of dog.”

Jones figured he’d had too much to drink and just missed the dog. He ordered another sandwich and watched the vendor. “When he was ready for the last act of putting the dog between the bread…he held the bun in left hand and picked up the dog with his right, and slapped it into the bun with a great flourish. When he closed the bun, darn if he didn’t slip the dog out and held it in the palm of his hand while handing the sandwich to me.”

As early as the late 1860s, you could find ham, tongue and corned beef sandwiches with mustard in restaurants. By 1899, The World-Herald in Omaha, Nebraska, reported on 64 types of sandwiches, which included turkey, chicken, sardine, egg, anchovy and tomato. In addition to savory sandwiches, sweet sandwiches were also eaten, such as shaved chocolate and plum cake sandwiches.

Cooks followed two important rules for making sandwiches, regardless of the filling. One—the bread had to be perfect, which meant fresh with thin, but not too thin, slices. Two—the bread also had to be buttered on both inside slices, but the butter could be substituted with mayonnaise or mustard, depending upon the filling.

Frank Dixon recalled his regular sandwich picnics as a teenager in Hastings, Nebraska, in the late 1800s: “In the summer we were a little slack on [attending church or Sunday school] as picnics down on the river were so much the go. Nearly everyone went and in big bunches….We would hire a wagon or wagonette or hayrack, all chipping in. Then would buy pop or ice cream. Then the girls would furnish the eats: ham and cheese sandwiches, pickles, hard boiled eggs and cakes.”

Plan your next picnic and take along some 19th-century ham sandwiches.

Combine all ingredients together (a food processor, on pulse, works great). Cut the crusts off the bread
and butter each slice. Add the ham and slice on the diagonal.