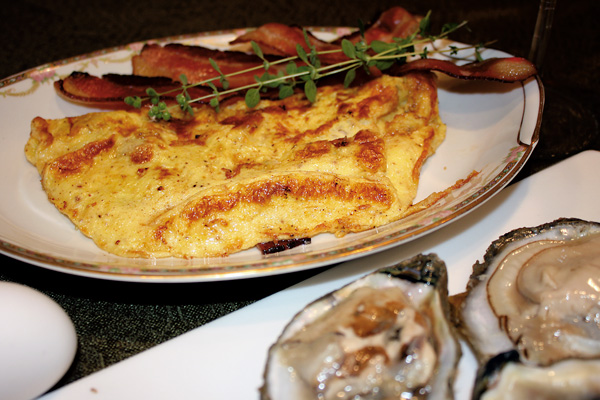 “We had gone into Hangtown one night for provisions, when we heard that a great strike had been made at a place called Coon Hollow, about a mile distant. One man was reported to have taken out that day about $1,500,” recalled Edinburgh-born artist John David Borthwick, of his 1851 tour of Hangtown’s gold fields.

“The town of Placerville—or Hangtown, as it was commonly called—consisted of one long straggling street of clapboard houses and log cabins, built in a hollow at the side of a creek, and surrounded by high and steep hills…,” he wrote. “There were boarding-houses…which forty or fifty hungry miners sat down three times a-day to an oilcloth-covered table, and in the course of about three minutes surfeited themselves on salt pork, greasy steaks, and pickles…. The counter served also the purpose of a bar…on shelves above them was an ornamental display of boxes of sardines, and brightly-coloured  tins of preserved meats and vegetables with showy labels, interspersed with bottles of champagne and strangely-shaped bottles of exceedingly green pickles…in the middle of which was invariably a small table with a bench, or some empty boxes and barrels for the miners to sit on while they played cards, spent their money in brandy and oysters, and occasionally got drunk.”

The common meal of Gold Rush miners in Hangtown was beefsteak and coffee, but some liked spending their newfound riches as soon as they got them. What would you do if you were tired of eating steak every meal and money was no object? Order something different and expensive! That desire likely led to the creation of the Hangtown Fry.

A 1948 Placerville article tells this story about the dish’s origins, “In 1849 a miner who had struck it rich at Shirtail Bend, hungry from short rations, staggered into Placerville, then called Hangtown because of the ease with which local lawbreakers found themselves strung up to oak boughs. At the first available eatery he passed up the grizzly bear steaks and demanded the best and most expensive food to be had. That turned out to be eggs and oysters. ‘Fry me plenty of both and throw in some bacon,’ were the words creating the Hangtown Fry….”

A more colorful version of the Hangtown Fry’s origin comes from a man who was to be hanged in the town. He asked that his last meal contain Olympia oysters, bacon and eggs, which were all expensive and had to be shipped in. While he was waiting for the delivery, his buddies broke him out of jail.

The Hangtown Fry is a staple on the menu at Tadich Grill in San Francisco. In 1849, Nikola Budrovich, Frano Kosta and Antonio Gasparich set up a tent on Long Wharf, where these Croatians served coffee and grilled fish and meat to hungry arrivals. After the 1851 fire, they called their café the New World Coffee Saloon. The business changed hands a few more times until John Tadich bought it in 1887. (But he wasn’t new to the saloon; he had worked as a bartender there since 1876.) In 1913 Tadich hired Tom Buich as a pantryman; in 1929 he sold the business to the Buich brothers. The Michael Buich family still owns the Tadich at 240 California Street.

Shared here is an 1882 recipe for an oyster omelet, which is almost like the Hangtown Fry. Try it with a glass of wine from one of these historic Western wineries: Chateau Ste. Michelle, Colter’s Creek, David Hill, Ste. Chappelle, Buena Vista, Valley View or Hall.

A Gold Rush dish you can still order in San Francisco!