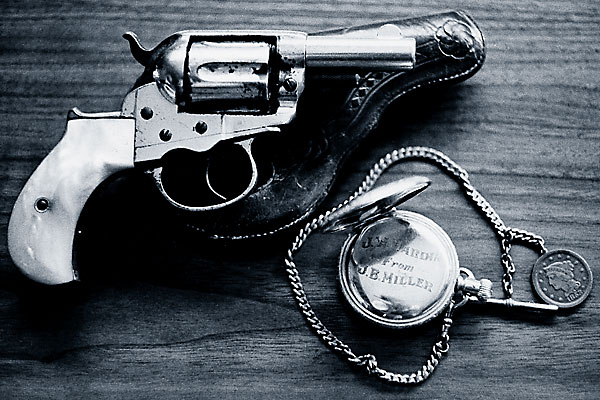 Texas shootist John Wesley Hardin had a career that spanned three decades (minus 16 years in prison).

Texas shootist John Wesley Hardin had a career that spanned three decades (minus 16 years in prison), ranging from the end of the percussion era of the 1860s to well into the age of metallic cartridge arms of 1895.

Although firearms were probably nothing more than mere tools to him, Hardin obviously enjoyed handling them; eyewitness accounts report him practicing with his six-guns. Very early in his career, he became known as a fast, accurate and skillful gun hand.

Much of Hardin’s early career—from 1868-77—largely involved the use of cap-and-ball revolvers. In his autobiography, Hardin frequently mentions Colt’s revolvers. Based on the dates of his gunfights, these Colts would have been the Model 1860 Army .44s or the 1851 and 1861 Navy models in .36 bore. At least one of Hardin’s 1851 Navy .36s has been identified by serial number in a circa 1918 letter, written by Joe Clements, a descendant of his cousin and fellow shootist.

Hardin states he used a Colt .44 (probably an 1860 Army) in his first killing, which involved a freed slave who had assaulted him. Years later, when Hardin was captured in Pensacola, Florida, on July 23, 1877, another ’60 Army Colt was taken from him after it became entangled in his galluses (suspenders)—much to the relief of the arresting officers—when he tried to use it.

One of Hardin’s six-guns was a Smith & Wesson Model 3 Russian First Model, in .44 Russian chambering, recorded as having been used by him in the killing of Deputy Sheriff Charles Webb in Comanche, Texas, on May 26, 1874. The Model 3 is perhaps the only documented metallic cartridge revolver from Hardin’s pre-prison era of lawlessness.

After being released from prison in February 1894, Hardin became an attorney. His inner demons still plagued the hair-trigger tempered Hardin though, and he quickly reverted to his old ways of gambling and drink. The firearms from this notorious Texas pistoleer’s final years are solidly documented through official court records resulting from his murder. Among these were a .38 caliber Model 1877 Colt Double Action “Lightning,” which his cousin by marriage, “Killer” Jim Miller, gave him after Miller represented him in a murder case. Hardin also owned a pair of .41 caliber 1877 Colt DA “Thunderers,” a Smith & Wesson DA “Frontier” in .44-40 chambering and a 4 3/4-inch barreled, .45 caliber 1873 Colt Single Action Army (with the ejector housing removed, most likely for an easier draw from his pocket). At the time of his death, Hardin was packing these two latter six-shooters. One of Hardin’s ’77 Colts, along with his .45 Colt-chambered ’73 Peacemaker, are housed at the Autry National Center’s Museum of the American West in Los Angeles, California.

Several examples of the Texas gunman’s weaponry have survived, thanks to court records, Hardin relatives and dedicated historians and collectors such as the late Robert E. McNellis of El Paso, Texas, who discovered several of Hardin’s documented guns and other memorabilia. Hardin’s guns at the Museum of the American West are the only ones I know of on exhibit; the rest of Hardin’s hardware is presumed to be safe in private collections.

Whoever the owners of these guns are, they, too, likely take “no sass but sasparilla.”