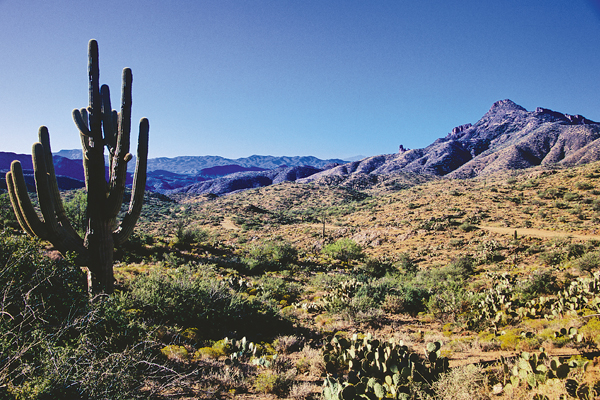 “This bug is to make my fortune,” he continued, with a triumphant smile, “to reinstate me in my family possessions. Is it any wonder then, that I prize it?

Since fortune has thought fit to bestow it upon me, I have only to use it properly and I shall arrive at the gold.”

Gold fever is infectious. Not in a flu-like way. Instead, it captures men’s minds and passions, and lingers with them forever. Ron Feldman has it … and has had it all of his adult life. He contracted it as a young child, when he was enthralled with books and stories of hidden treasures and lost gold. Now, he may be on the edge of finding it.

Feldman and his partners in HEAT (Historical Exploration and Treasures) go daily into the Superstition Wilderness east of Apache Junction in Arizona, and with government permission, manually dig for a lost Spanish Mine. Now wait a minute …  isn’t the fabled Lost Dutchman Mine located in the Superstitions?

After growing up on the East Coast and California, Feldman moved in 1968 to Arizona where he established a successful stable offering trail rides and pack trips into the rugged mountains that were once home to the Apaches. For over a third of a century, he read stories and books about the Peralta Mines and the lost Spanish treasures hidden deep in the Superstitions, and he heard the tale of Jacob Waltz’s famous Lost Dutchman Mine.

Feldman absorbed every bit of information he could find on the history of mining in the region. He found that even a neophyte like himself could pick up nuggets of information from other “Dutch” hunters who virtually inhabited the Superstitions. Soon, fact and fiction became easier to sort. He gradually gained the respect of the old-timers who, in their later years, shared much of the knowledge they had gathered themselves.

Over the years, Feldman has accumulated a serious band of like-minded treasure seekers and Dutch hunters. One member of his team, “Mic” McPherson, helped Feldman find the Lost Adams Diggings in 1989. Now, Feldman and his team are on the prowl for the Lost Dutchman Mine.

The Lost Dutchman story actually begins in the 1800s when the wealthy, Mexican Peralta family came to the region to work mines under a Spanish land grant. Troubles with the Apaches made the family’s mining operation dangerous. After the land was ceded to the United States, the Peralta party was trespassing on U.S. soil. It’s believed the group buried their amassed bullion, hoping to return at a later time. During the miners’ escape to Mexico, Apaches attacked and 148 of the party were massacred. Documentation suggests that only two young boys survived and made it to Mexico.

Jumping ahead to the late 1860s, German prospector Jacob Waltz moved to Phoenix and began prospecting in the mountains east of the new city. As the story goes, Waltz and his partner befriended a Mexican who had been working a mine in the mountains. It’s said they saved his life, and in gratitude, the man (one of the two who had escaped the Apache massacre) took his new friends to several Spanish gold mines. In subsequent years, the Dutchman—as Waltz was called—worked both placer and lode gold mines in the region. Dozens of prospectors in the Superstitions attempted to follow him to his secret mine. All were unsuccessful; a few are said to have never left the mountains. Shortly after the Dutchman’s death in 1891, a cache of incredibly rich gold ore was taken from a candle box beneath his bed.

That ore was recently analyzed by spectrographic analysis, and the results indicate that his ore does not match the ore from any known source.

Over the years, the “Lost Dutchman Mine” legend grew to become the West’s most famous “lost mine,” reaching a fever pitch in the early 1950s when hundreds of Dutch hunters flocked into the western end of the Superstitions. Among those hunters was Ted Cox, who had lived with several ranchers in the region who personally knew Waltz. Cox concentrated his search on the eastern end of what is now the Superstition Wilderness.

Through Cox’s widow, Feldman’s group gathered firsthand knowledge that Cox excavated a mine and uncovered a stash of Spanish bullion, a fact that has been almost substantiated by the use of Ground Penetrating Radar. Because of poor health, Cox never returned to the mine, and it almost became forgotten. Believing that this mine is the source of Waltz’s placer gold, Feldman theorizes that the bullion lies at the end of a long collapsed drift and speculates that Waltz never searched that area while working the site.

The permit allows Feldman’s group to re-excavate the main shaft and drifts under strict controls and government supervision. The process began in early September 2004.

What happens if they discover the Spanish bullion? Under present regulations, the federal government will claim the find and hold it for one year. If no one comes forth to rightfully claim the treasure, it’s anyone’s guess.

While HEAT’s members would certainly hope to claim a portion of any find, they declare that it’s just as important to find and change a piece of history.