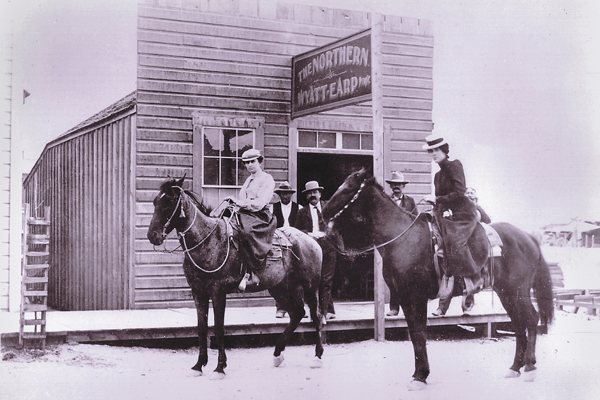 If it could talk, what stories this old bar could tell. Wyatt Earp himself likely dispensed beer, wine and spirits from behind its mahogany facade when the bar sat in his Northern Saloon in Tonopah, Nevada.

Originally built in 1894, the bar spent its first years in Virginia City, Nevada, during that city’s silver revival.

In 1901, it was purchased by Al Martin for a new saloon and gambling hall in the mining district of Tonopah. Wyatt Earp was fresh from his adventures in Alaska and flush with money looking for another investment, so he backed Martin in the Northern Saloon. While Martin managed the saloon, Wyatt and his wife, Josie, prospected for color in the surrounding mountains. But, no doubt, there were times when Wyatt put on a barkeep’s apron and slid a beer or two over the bar.

In 1903, partners Martin and Earp relocated the Northern Saloon to nearby Goldfield, Nevada, taking the bar with them. Two years later, the Martin-Earp partnership ended, and the contents of the Northern, including the bar, were sold.

At this point, the bar’s history gets a little fuzzy. It may have seen service in  the Monaco Saloon in Rhyolite, Nevada. In 1910 as Rhyolite’s fortunes waned, the bar was moved again, possibly to the Arizona Club in Las Vegas or to Beatty, Nevada. In any case, it was definitely in Beatty by 1937, because it was relocated yet again, as noted by the following inscription found on the bar’s back panel:

Moved this bar from the old Mayflower club

Mr. Wess Moreland and installed it in the old depot at Rhyolite Nev.

Wess Moreland was actually Norman Westmoreland, who operated a “road house” at the former Rhyolite railroad depot from 1937 until his death in 1948.

Following Westmoreland’s demise, the road house property, along with the bar, passed to his sister, Frederica Heisler, a minister’s wife. Mrs. Heisler was appalled to discover she had inherited a “bawdy house,” which she immediately closed. Realizing the historical significance of the place, she eventually reopened the building as a museum.

In 1983 Mrs. Heisler died and her estate was sold. During the next eight years, the bar’s fate is unknown, but in 1991, it was moved to the Bella Union in Tombstone, Arizona, where it remained until 1998, when it was sent to Rancho Mirage, California.

Despite its 109-year history, the bar is in remarkably good shape.  One of the two nearly 10-foot-long back mirrors is original, the other having been replaced during the 1930s.  Unlike most bars of its era that have been painted over, this one has had only a few coats of varnish. The decals showing it was Union-made are still intact, as is the patent number plate. The manufacturer’s name, Brunswick, Balke and Collander Company, is still visible on the bar’s face.

The upper left column on the bar-back shows evidence of a burn, likely inflicted by an oil lamp hung too close to the wood. Along the top of the bar-back are a series of small holes made by tacks used to hang coyote tails, hunting trophies of Norman Westmoreland and his friends.

As legend has it, on Thanksgiving weekend 1905, a lover’s triangle erupted in a gunfight between the Monaco Saloon’s bartender and his lover’s husband in Rhyolite. The husband burst into the saloon, six-shooter drawn and began firing at the bartender. The first shot glanced off the bar-front’s mahogany face, about elbow high. The scar left by the .44-caliber slug is still visible. The bartender crouched behind the bar and returned fire. Unable to see the bartender, but figuring  out where he was from the position of his gun-hand, the husband shot into the bar’s lower face, killing him. The hole made by the fatal bullet has been repaired, but like an old wound, its scar remains.

Today, the bar is the pride of Jeff and Cindy Moroni, and the centerpiece of their store, Antique Outpost, in Rancho Mirage, California.

Gary Ledoux is a freelance writer living in Southern California.  He has had several articles published in the Tombstone Epitaph, Tombstone Independent, and Tombstone Tumbleweed newspapers. This article is an excerpt from his book, Tombstone: A Chronicle In Perspective.