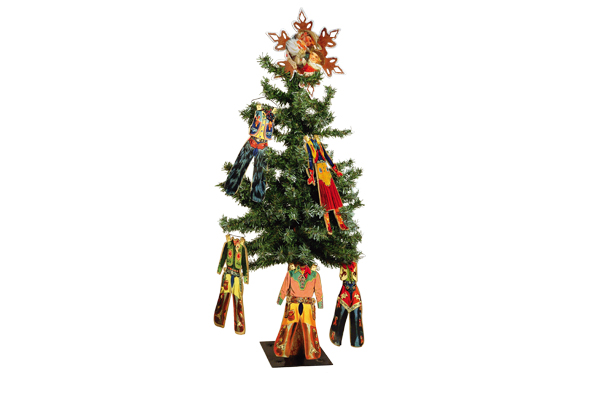 A tin cup. A penny. A piece of candy.

That was the sum total of the Christmas gifts that future author Laura Ingalls Wilder received one year as a girl, living in that little house on the Kansas prairie. And she felt lucky to get them.

Sure, the Little House presents are not high on the cool quotient, but holidays in the Old West weren’t exactly commercial ventures. Whether one was celebrating Christmas like the young Laura or Hanukkah like the young Josephine Marcus (soon to become Mrs. Wyatt Earp), most gifts given to children on the frontier were homemade (and took a fair amount of time and effort to make)—cornhusk dolls or carved wooden toys, knitted scarves or socks. In Jewish homes, loved ones gathered, singing songs each time a candle was lit on the menorah. Children received gelt (money) or candy to bet with when playing with the dreidel. Baked goods served as presents, as well, and those who celebrated Christmas often used such goods to adorn the tree as ornaments.

Most Christians today cannot imagine Christmas without a tree, but they were seldom used on the frontier. Some desert places just didn’t have trees, period, but even in wooded areas, most cabins or homes were too small to host old tanenbaum. So settlers would make do with what they had, creating wreaths or using holly, nuts, berries and pinecones to spruce up the place.

No matter what holiday one celebrated on the frontier, the feast was always the big feature. Besides all the pies and cakes and cookies, there’d be vegetables from the garden. Some of the menfolk would butcher a hog or cow or shoot some wild game near the house. Jewish households often  served fried foods to commemorate the significance of oil to their holiday. For the holiday meal, entire families gathered—singing, storytelling and praying had big places at the table.

Make no mistake—those were difficult times and tough circumstances for folks. Yet most of them remembered the holidays with a great deal of fondness, if not downright yearning for a “simpler time.”

What we’re offering up in the next few pages will simplify your Western holiday. Fun can be had with great games for Western enthusiasts to play with the family; other gifts for the cowboys and cowgirls in your life are also featured, as well as ornaments for those who like to deck the halls with an Old West feel.

There should be enough money left over to buy that piece of candy.