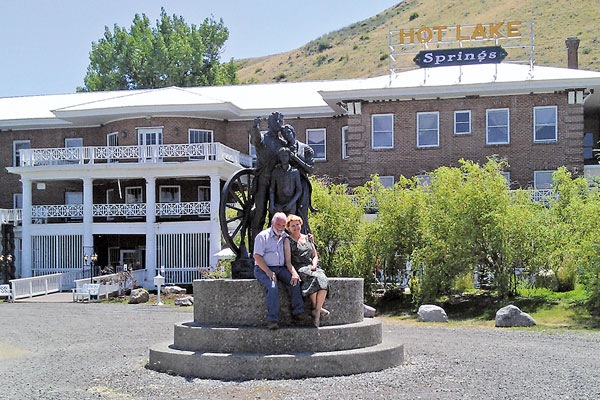 The first time Lee and David Manuel laid eyes on Hot Lake Springs, they thought the three-story brick building could star in a horror movie: it had no roof, no floors and no windows. Empty for most of the last 70 years, the building was obscured by a forest of overgrown trees and shrubs, a majority of them long dead.

It was a Sunday after church, and their 22-year-old son, Larry, had brought the family to La Grande, Oregon, to see an abandoned resort he thought the family should restore. “We’re supposed to do this,” he told them.

The same day, Lee flew to California and bought the property. Her family gambled everything it had, hoping Larry was right. That was November 1, 2003.

“I began night crews for 15 months just to clear the site,” Lee says. “For seven months, I had a fire the size of a semitruck to burn the trash. I hauled away 70 semi loads of garbage. I brought in 1,000 loads of fill dirt. I planted 1,000 trees and bushes. Then I moved my family here in campers, and we dry camped for three years—we didn’t have utilities—until we got some of the building in shape.”

She admits the work seemed overwhelming, but it only got worse. “We may not have known how much this was going to take when we started,” she says now. “It was three or four years before we realized just how bad it was.”

By then, the nation was entering the worst economic downturn since the Great Depression, with no loans for projects like restoring a century-old hotel. “There was no bank, there were no grants—we cash flowed it ourselves,” she says, noting that the family has sunk “upwards of $15 million” into the project.

What the family was gambling on was a rich history that had made this a favorite gathering place for more than 200 years. American Indian tribes had long used the healing hot springs—water at 208 degrees, with 2.8 million gallons a day spouting out from an underground aquifer, in what Lee says is the “hottest, highest-producing hot springs in the world.” Families traveling in covered wagons along the Oregon Trail in the 1840s stopped here for a respite.

The first hotel was built here in 1864, while the brick building at the springs saw completion in 1908. The Roaring Twenties were as roarin’ here as anywhere in the country, but a fire in 1934 destroyed the wooden buildings and damaged the main brick structure. The Great Depression seemed to add its final nail into the coffin.

Then the Manuel family came along and decided to change the town’s luck. “One of the great surprises was the support and cooperation from the community,” Lee says. “We had daily miracles. So many from the community came out to volunteer their help.”

Interest in the project was so great, that when word got out that the restoration was underway, the family had to hire extra staff and host two tours a day to handle all the people who visited.

Meanwhile, the Manuels moved all their assets from Joseph, Oregon, where they had worked in hospitality and retail businesses for 20 years. Larry built a new building to house their bronze casting business, which helped bring in immediate cash. They greeted their first overnight guests for the hotel’s 22 rooms in late 2010.

While Lee admits the resort “will always be a money pit,” she sees it as a happy venture for her family to carry on. Today, eight family members and some 40 employees operate the resort.

Lee’s advice for anyone wanting to embark on similar historical restoration projects is, “Pray, and just do it.”

Hot Lake Springs has a new life, after all these years, because of one family’s belief that this piece of the Old West was worth saving.