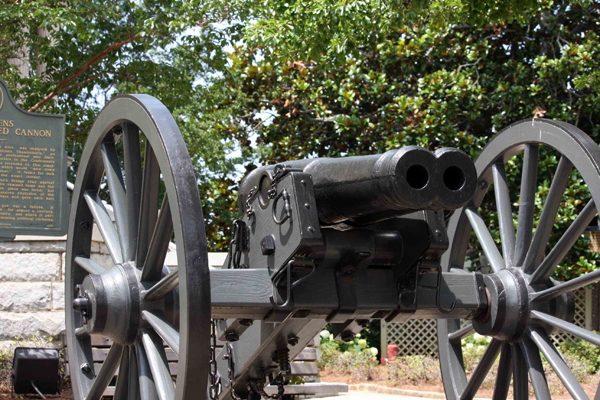 In 1862 John Gilleland, a dentist and sometimes mechanic from Georgia, had a genius idea. If one cannon could wreak havoc upon the enemy, why not use two? His appropriately named double-barreled cannon called for two six pound guns, but cast as a single piece. The plan was to simultaneously fire both barrels which were splayed slightly outward. This would cause the cannon balls, which were connected with a thick chain, to diverge. It was Gilleland’s hope that this would stretch the chain taut and “mow down the enemy somewhat as a scythe cuts wheat.”

Before long, it was time to test the double-barreled-man-mower. Gilleland was confident his invention would easily destroy the two upright poles set out as targets. According to noted Georgian historian Richard E. Irby, Jr, here’s what happened next:

One ball left the muzzle before the other and the two balls pursued an erratic circular course plowing up an acre of ground, destroying a corn field and mowing down some saplings before the chain broke. The balls then adopted separate courses, one killing a cow and the other demolishing the chimney on a log cabin. The observers scattered in fear of their lives. Some reports claimed two or three spectators were killed by the firing.

In short, the shot managed to kill a cow, destroy an acre of land, obliterate some trees, turn a chimney into dust, and possibly kill innocent bystanders. All this while leaving the target poles untouched.

Maybe Gilleland should have stuck with dentistry.