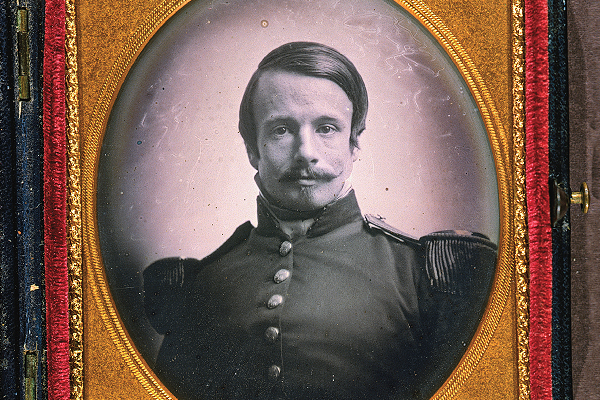 From the Atlantic to the Pacific oceans, in peacetime and on bloody fields of war, Henry L. Abbot engineered the infrastructure of a new nation—during a lifetime that spanned nearly a century—and many of the greatest engineering feats in history.

Born August 13, 1831, in Beverly, Massachusetts, Henry was Joseph Hale Abbot and Fanny Ellingwood Larcom’s first of seven children. The father’s side of the family descended from George Abbot, who emigrated from Yorkshire, England, to Andover, Massachusetts, in 1642.

His parents sent Henry to Boston’s Latin School and then to West Point, where he graduated in June 1854, ranking second in his class. Ironically, his fellow classmates included G.W. Custis Lee, son of Robert E. Lee, and James Ewell Brown “Jeb” Stuart, and within a few years the classmates were wearing uniforms on opposite sides of the Civil War.

Abbot chose a career with the U.S. Corps of Engineers, which in 1855 sent him West to scout possible rail routes from California to Oregon. His adventures took him from Sacramento north to The Dalles, Oregon. Because of an Indian uprising, he was forced to survey a different route than initially planned. His survey with Indian guide Sam An-ax-shat led him over the Cascades to Oregon City. The pass and trail bear his name today.

In 1861, Lt. Abbot was with General Irvin McDowell’s troops at the First Battle of Bull Run, where he was seriously wounded and brevetted to captain for “gallant and meritorious services.” Abbot recovered and later directed the construction of numerous Union defensive battlefield structures.

His development of the use of heavy mortars for coastal defenses and siege warfare, as he employed during the Battle of Petersburg in Virginia, led him to engineer a post-war, seacoast mortar battery system known as the “Abbot Quad.” His post-war study with Capt. Andrew A. Humphreys of the Mississippi River, Report Upon the Physics and Hydraulics of the Mississippi River, would influence 140 years of river management.

Abbot served in the Army Corps of Engineers until his retirement in 1895. His final contribution to engineering—and American history—came during his service as a consultant on the construction of the Panama Canal—first for the French from 1897 to 1900, and then for the United States from  1905 to 1906. His engineering report to President Theodore Roosevelt on using a series of locks across the isthmus was ultimately adopted in the construction of the Panama Canal.

At the end of his life, Abbot returned to Massachusetts, living in Cambridge until his death on October 1, 1927, at the age of 96, not far from where his family first came ashore nearly three centuries before.