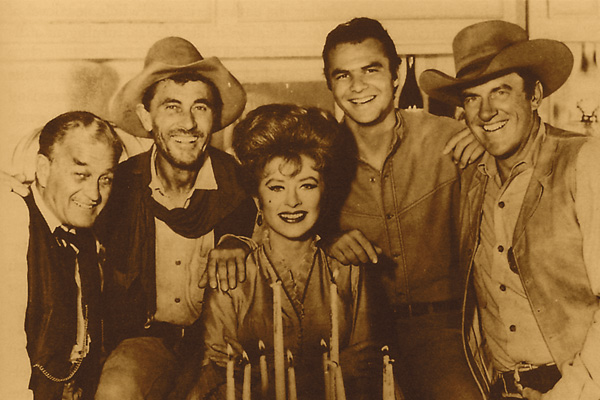 Since 1955, he has towered above all Western lawmen—at least those on television.

That’s not just because James Arness, better known as Marshal Matthew Dillon, stands 6-foot-7. Arness was nominated for three Emmy awards for his portrayal of the Dodge City lawman, and Gunsmoke, which ran for 20 years on CBS, probably will always remain TV’s longest-running Western.

Arness, who turned 79 in May, lives near
Los Angeles with wife Janet, and works on charity projects and keeps up with fans
on his website, www.jamesarness.com. Last year, his auto-biography, co-written with James E. Wise Jr., was published by McFarland & Co. (James Arness: An Autobiography, $35). In it the retired actor reminisces about growing up in Minnesota, his service in World War II (he was wounded at Anzio), John Wayne and Gunsmoke.

True West tracked down the legendary Marshal Dillon to hear about his career on TV’s greatest Western.

True West: How did you become an actor?

James Arness: I came home from the service to Minneapolis, and I was cruising along and enjoying being back home and in civilian life. A friend of mine who had been in the Navy out here in Southern California had just gotten home, and he called me up and we met and had a few drinks and he said, ‘Boy, we ought be out there right now, it’s a great place.’ He knew some guy who had been an extra in movies, so we came out, looked him up and thought maybe we’d get on as extras once in a while. We just kind of drifted in it. I did wind up going to a little acting school and picked up on that, and things just sort of opened up there for a while.

TW: I’ll say. Your first role was as one of Loretta Young’s brothers in The Farmer’s Daughter. You played in a number of Westerns, in two sci-fi classics, The Thing and—my favorite—Them!, had turns with Spencer Tracy and James Stewart, plus made four films with John Wayne. Then came Gunsmoke. Did you ever want to leave the series? I mean, 20 years is a long time.

JA: No. An awful lot of TV actors tried that and didn’t do too well. Just a few of them made the transition—Clint Eastwood, Burt Reynolds, Steve McQueen—but not too many made it.

JA: It ran on radio for, I think, three or four seasons before they brought it to television, so they had the characters all honed down and the storylines. In fact, during the first couple of years we used many of the old radio scripts just readapted for television. That was one of the main things that got the ball rolling. People would see it and realize it was a really high quality show.

TW: What do you think of Matt Dillon?

JA: Gee, as far as playing him, it was wonderful. It took me a little while to get into the groove. When we first started, I had played a number of different parts in pictures and everything but never had to carry that much responsibility. In most of those early episodes, I was in almost every scene. I was suddenly faced with being in 15 pages a day and having to learn all this dialogue (laughing). But after a couple of years of that, I began to feel more comfortable, and really from that time on, it just sort of played itself. I felt I had gotten into the character, and it was just really fun from that point on.

TW: From what I’ve heard, y’all never seemed to take yourselves too seriously on the set. You mention in your autobiography how when you re-shot the opening gunfight, you let the bad guy beat you. What a hoot.

JA: I think that was one of the main features on the set every day. We had a light touch. Everybody was taking it easy. We didn’t have a lot of conflicts between people, so it was great fun.

TW: You were a big practical joker.

JA: We used to pull a few gags here and there. I think we all did. I always had fun when an actor would come in, who—and you could spot them right away—was very serious about their part, playing this just right, and really being immersed in their character. And that was always kind of a lure to see if you could break them up. And once in a while it was a lot of fun. You’d keep going until eventually they would crack. After that, you’d go back to doing it seriously again, but we had a lot of fun like that.

TW: One reason for the show’s longevity had to be the camaraderie between Matt, Kitty, Doc, Chester and, after Dennis Weaver left, Festus.

JA: It was kind of amazing how all of the four characters blended together into a real team. They couldn’t have had anybody better than that.

TW: And you had great guest stars. Richard Kiley, Gene Evans, Morgan Woodward, a slew of them. Those guys looked like they could really have walked the boardwalks of Dodge City.

JA: It’s interesting when I happen to tune into one of the reruns and I see these guys, plus many other guys that were so good. I saw one just a couple of days ago and I’m saying to myself, “Whatever happened to these guys?” They were really fine actors and great Western types. I know the Western is out—they aren’t even making them anymore—but I wonder if they did if they could find those kind of guys and those kind of faces that really look Western.

TW: There have been a spate of theatrical movies based on TV series. So who do you see playing Matt Dillon if they made a Gunsmoke movie today?

JA: Gee whiz, I can’t really think of somebody offhand, but I’m sure there would be somebody out there. I’ve been watching Band of Brothers. They’ve got some amazing casting there. I don’t know where they got those guys because most of them are completely unfamiliar and it’s like you’ve never seen them before in anything else and yet they’re excellent actors and they all have great faces. They look like the real thing, so there’s a lot of good actors out there today.