When the Bitterroot Mountains exploded in wildfires in 1910, Buffalo Soldiers from the 25th Infantry helped evacuate the town of Wallace, Idaho. The blaze, possibly the largest forest fire in American history, destroyed a third of downtown.

The story is part of the rich history that played out in the so-called silver capital of the world. Some 1.2 billion ounces have been pulled from the surrounding mountains since 1884. That history includes Wallace twice living under martial law, in 1892 and 1899, as angry miners fought management bosses. 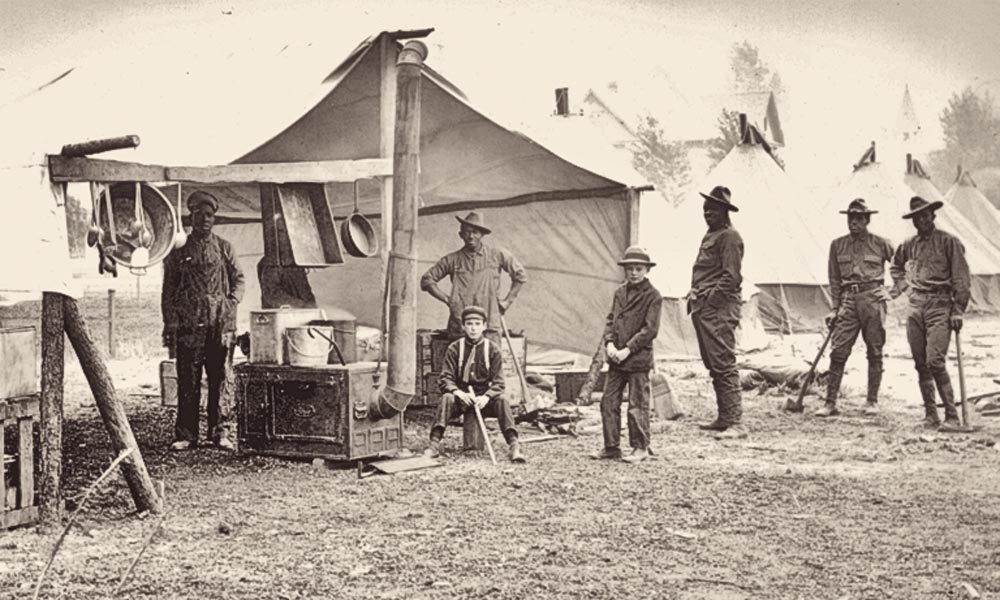 “When you’ve been in a hole for 14 hours and told you might lose your job by people who’ve been counting money all their lives, you get upset,” says Chamber of Commerce Coordinator Dave Copelan. “That rebel tradition is still part of our character.”

But Wallace today has the look of a contented place, a picture-book town set in a deep canyon, its walls thick with sheltering pines. Moose and elk sometimes roam the streets of the city, and although the population rarely tops 800, Wallace has a dozen saloons and two microbreweries.

The town also had several bordellos that operated illegally until 1990.

The Oasis Bordello Museum looks as it did when the girls skedaddled ahead of the cops in 1988. That authenticity includes the furnishings and appointments in the second-floor rooms. Don’t miss the mining-themed murals by artist Robert Thomas adorning the walls of the ground-floor gift shop.

Built in 1895 as a hotel and saloon, the Oasis withstood the 1910 fire, one of the few buildings to survive intact. That event gets full coverage at the Wallace Mining District Museum, recently named one of Idaho’s finest.

See exhibits and photographs, an 18-minute video of life during early mining days, and the original Pulaski, a tool combining an axe and a hoe. Local forest ranger Ed Pulaski invented it.

During the big burn of 1910, he saved 39 people by leading them into a tunnel until the fire passed. Copelan says firefighters come from around the world to see the Pulaski, a staple of wildland firefighting today.

The Wallace Blues Festival, six years old and growing in popularity, dominates the streets the second weekend in July, and the Sixth Street Melodrama has been entertaining folks for 44 years. The upstairs portion of the 80-seat theater was a bordello from 1899 until 1977. Locals call the popular shows “Wallace’s Broadway.”

With the town still a silver mecca—miners extracted $90 million worth in 2015—it makes sense to understand what it’s like to work underground.

The Sierra Silver Mine Tour transports visitors to the mine in an open-air trolley and takes them underground, hard hats required, to hear a miner-turned-tour guide explain the nuts and bolts of how it’s done.

With so much natural beauty surrounding Wallace, outdoor lovers have plenty of choices. For hikers and bikers, the Trail of the Coeur d’Alenes begins in downtown Wallace and runs along 73 miles of asphalt, past rivers and lakes, and 36 bridges and trestles.

For goofy fun, find the downtown manhole cover marked “Center of the Universe, Wallace, Idaho.” In 2004, the mayor formally gave the town that designation, even though nobody knows if it’s true or not—that rebel streak again.

But for history-lovers, one fact stands tall: The entire town of Wallace is listed on the National Register of Historic Places.