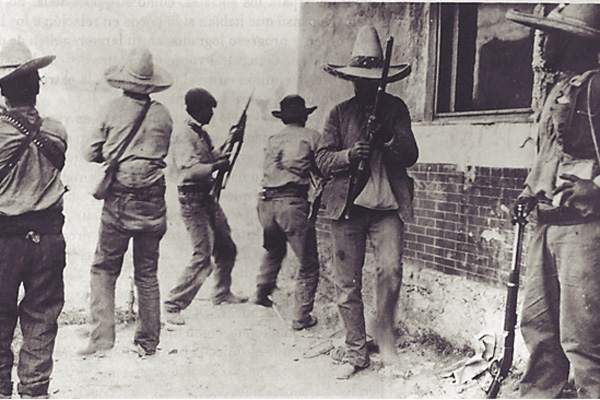 From about 1870 until the late 1930s, one style of hat reigned supreme on the Mexican border—the Sugarloaf Sombrero—named for the crown’s resemblance to the way sugar is sometimes packaged in Mexcio (a sugarloaf is sold in small, hardened cones).

The reason for the hat’s popularity had less to do with style than function. Hatmaker Dave Johnson, of D Bar J Hatmakers, claims the super-tall crowns “acted as a cooling tower. The shorter the crown, the hotter the head.” Obviously, in the searing deserts of the Southwest and northern Mexico, every advantage to stay cool was exploited. Johnson also maintains J.B. Stetson made many of the Sugarloaf Stetsons and did a thriving business in Mexico as the hat style took over the range.

“Vaqueros love to customize their hats,” Johnson told us from his shop in Las Vegas, Nevada, “and in the old days they often had Mamacita or their querida sew on elaborate stitching” (see the beautiful example opposite page).

According to Pat Garrett, Billy the Kid preferred a similiar sombrero (see drawing above). The Kid and many other New Mexico cowboys bought Sugarloaf Sombreros shipped up from Chihuahua. Other Old West characters who wore the practical headgear included Judge Roy Bean and Wayne Brazel (who allegedly killed Pat Garrett).

Texans put a crease in the tall crowns to give it a north of the border style and this eventually evolved into the so-called Tom Mix style hats of the 1920s (see Old West Journal, Fall, 2001).

During the Mexican Revolution period (1910-23), the Sugarloaf became even bigger with heavy curled brims, some 10 to 13 inches in width. Pancho Villa and Emiliano Zapata can be seen sporting these magnificant sombreros.

Once, it seemed the Sugarloaf adorned almost every male head in Mexico, but today they are virtually extinct. What happened?

Ironically, it was the automobile that helped kill the style. “You can’t drive a car in one, “ says Phil Spangenberger, historian and field editor for Guns & Ammo magazine. “While the original model Ts and touring cars were open, the Sugarloaf survived, but as soon as cars became enclosed the style disappeared.” It also didn’t help that the Sugarloaf became synonymous with the caricature of the “lazy Mexican.” The image of a perpetual sleeping peon with a huge sombrero down over his eyes and a serape draped over his slumping shoulders became a very negative stereotype, and by the 1960s, the Mexican people had abandoned the style completely.

Oddly enough, a mutated, cartoonish, straw version of the Sugarloaf can still be bought in Mexican beachtowns, but it is a far cry from the classic Sugarloaf. Today, the all but extinct hat style is highly collectible. Afficionados and Old West buffs will pay $1,000 and up for a good Sugarloaf Sombrero.