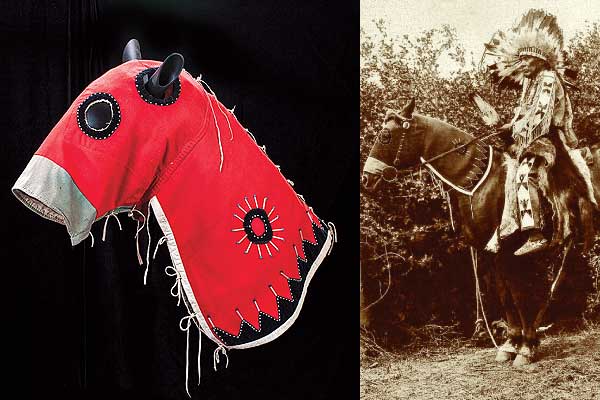 The history of North American horse culture is epitomized by the full-face horse mask in red trade cloth, with black velvet trim and seed blue star and sunburst, that hammered down for $40,000 at Brian Lebel’s Old West Auction in Denver, Colorado, on June 28.

Photographic provenance that begins circa 1890 documents this horse mask among the Nez Perce, Blackfeet, Crow, Cayuse and Lakota, roughly 85 years after the increased availability of European firearms had made full-horse leather armor obsolete. Unlike the masks, examples of the full armor exist only in illustrations and journal entries, such as when Lewis and Clark noted the antelope’s skin armor that covered the Shoshone’s horses in 1805.

The horse armor was modeled after the Spaniard’s—first seen by frontier Indians when Francisco Vásquez de Coronado and his men rode armored horses from Mexico into present-day Kansas in 1540-42. The first recorded instance of Indian warriors and horses outfitted in leather armor, in imitation of the Spanish, was the Pueblo Revolt of 1680.

To illustrate their abiding respect for the horse, tribes continued to decorate their equines in masks, even after confinement on reservation, and such horse masks can be seen worn in tribal parades to this day.

This piece of history was just one of many Brian Lebel brought to collectors in his 25th anniversary auction, which hammered in at a total exceeding $800,000.