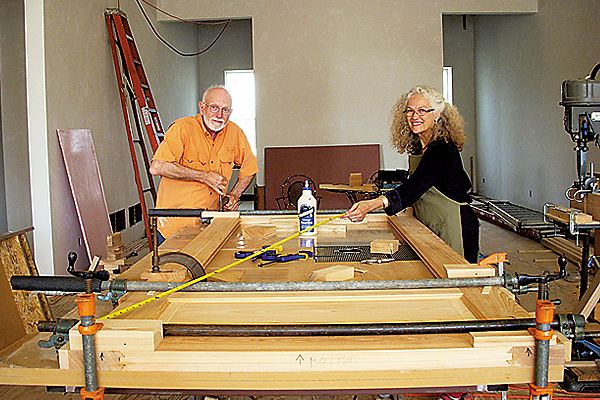 The “Wizard of Oz” taught that you don’t have to go far from home to find your dream. Donna and John Sickles know what that means, and Saint Jo, Texas, is thankful.

“I grew up 50 miles away, but I discovered Saint Jo as an adult,” renowned artist Donna Howell-Sickles says. “John and I were looking for property all over the country, but we fell in love right here.”

Even more, she’s related to the Howell who founded Saint Jo; his youngest brother was her great-great-grandfather. “I discovered that it’s actually my Howell Street in Saint Jo,” she says with pride.

In 1996, she and John bought a building on the square in what she calls a “classic little Western town—it has a plaza and a gazebo and, for better or worse, what they originally built just stayed.”

Retired from building architectural models and a veteran of restoration, John was excited about fixing up the building in Saint Jo. He had already spent 25 years restoring an 1895 Victorian in Frisco, which the couple donated to the city.

His first project was to convert the second floor into an open loft where the couple lived for about a decade. The downstairs space became a gallery for Donna’s vibrant cowgirl paintings and works by other artists. They also bought the Presbyterian Church a block off the square to turn it into Donna’s studio.

So now they were residents in this town of about 1,000 that’s right on Highway 82  and a possible stop if you’re traveling from Louisiana to Colorado.  It’s in the midst of “pretty, hilly country,” says Donna, and since it’s less than two hours from the Dallas-Fort Worth complex, the town draws a number of weekend visitors.

The couple really hadn’t considered the falling-apart building next door to the gallery until the then-mayor of Saint Jo, Tom Weger, said to John, “Somebody has to save that building—it’s just too cool.”

That’s how their fourth Saint Jo project got started—rebuilding the 1872 Frie building named after a doctor who had practiced from there. This time, John bit off a great big chew: The building was such a mess, the city had condemned it, but he resolved to redo it “to the nth degree” as it originally stood.

His resolution meant he had to have special wood milled, redo the “beaded” ceiling, hand-crimp the new metal roof and rebuild walls that fell down. It meant pounding out and reusing the square nails, and searching for authentic items of the day. “Anything I took off, I saved and replicated,” John says.

He has spent three years on this building, hoping it will be done in the winter of 2012 when it will become Donna’s new studio.

But restoration work isn’t all hammers and nails and a new coat of paint. “You still have to be a visionary to see the crowds,” Donna says. “We were among the early believers.”

Indeed, others have joined them to bring new life and new visitors to Saint Jo. The hotel across the street has been renovated. The town boasts a new restaurant, the saloon has become a museum and the bank has restored its storefront.

“I’m happy to be here,” Donna says.  “It’s a good feeling to know you’re helping redo a building that will last another 120 years.”

Any advice for others who might want to go down this path? John says, “You’ve got to be real dedicated and know it will take three times more money than you think it will cost.”

Donna adds: “It makes sense to put your money where your heart is.”