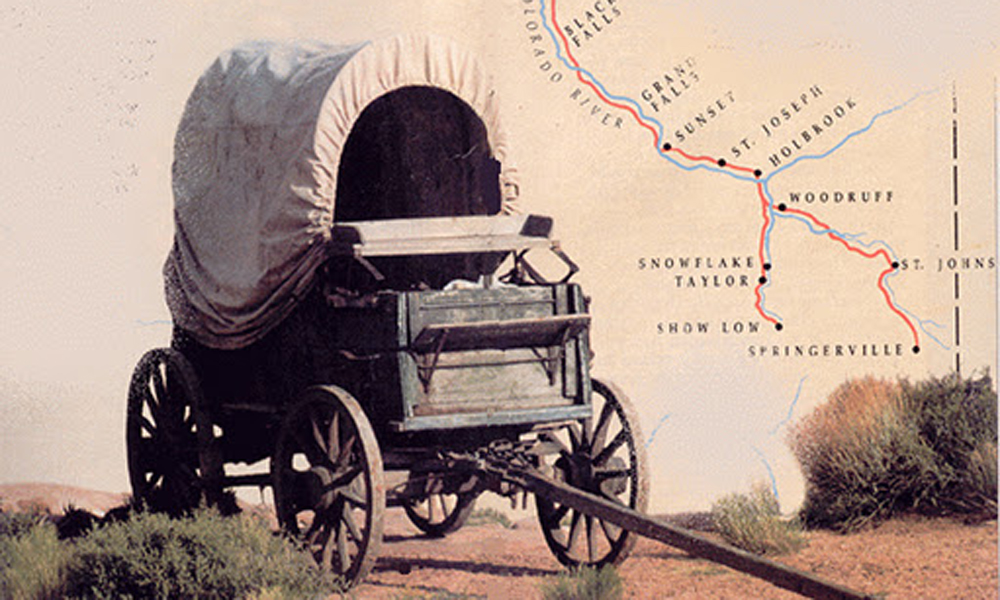 There were many trails that crossed Arizona in the early days including the Butterfield Overland Stage, the Gila Trail and the Beale Camel Road and most of them crossed east to west.

One that isn’t as well-known is the trail that early Mormon pioneers followed out of Utah starting in the 1870’s. It was called the Hamblin Trail for Jacob Hamblin, who was a kind of Latter Day Saint Daniel Boone. The trail led across the Arizona Strip, up and over the Kaibab Plateau and over to the Little Colorado River around today’s Winslow and Holbrook.

From there Mormons spread all across the land, settling along the Little Colorado River, in Eager, St. Johns, Lehi, Mesa, Safford, and St. David and even into northern Mexico.

Arizona didn’t have a Mormon Temple until 1926. Since it was inappropriate for young unmarried couples to travel together they were married in local wards before they headed up the trail to the temple at St. George, Utah to have their vows sealed in the temple.

It was a journey of several hundred miles and could take several weeks. Some couples hoped to wait until their vows were sealed in the temple to consummate their marriage but for most they were legally married and thus it was a “Honeymoon Trail.”

They traveled by wagon through the rough central mountains of Arizona to the Little Colorado River at Sunset Crossing, today’s Winslow, then north past Moenave Wash to Lee’s Ferry on the Colorado River and west across the Kaibab Plateau to St. George.

The wagons could make at best, 15 miles a day.

Some were able to make the long journey right after their marriage in the local ward however, it was not uncommon for couples to have to wait for months, even years before they could make the trek.

After the ceremony in St. George the happy couple rested a few days, loaded up on supplies, hitched up the team and headed back down the trail to Arizona.

For those who made the journey, despite all the bumps and grinds, provided countless couples with a lifetime of fond memories of starting out life together on the Arizona frontier.

Although it’s commonly known as the Hamblin Trail, because of all the young couples who made the journey back to Utah to have their vows sealed, it’s fondly remembered as the Honeymoon Trail.

A few years ago I interviewed an elderly Mormon couple who’d made the trek. Aware of the problems encountered I observed that if newlyweds could stick together through a trip like that their marriage could handle all the curve balls that life threw at them.

They smiled and agreed. Then I asked the wife: “Did the idea of divorce ever occur to you on the trip?”

She smiled and said, “I never considered divorce….but I did think about murder once or twice.”