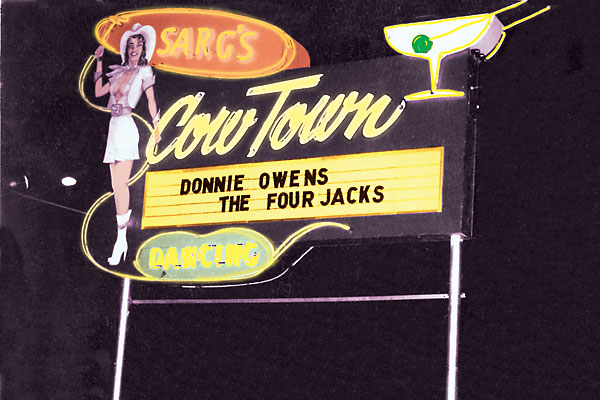 Phoenix Madison Square Garden was the most recent loss, torn down in 2005, to be replaced by a nondescript office building.

Buddy Long outlived them all. He was the ticket to the honky-tonk scene that twanged in Phoenix, Arizona, in the 1950s and early 1960s.

“Slowly, I’m falling more in love with you…” Buddy Wheeler’s steel slides Buddy Long and his Western Melody Boys into the Webb Pierce favorite. A tall, lanky, Louisiana-born, 25-year-old redhead, his cowboy hat cocked back, stands on the stage. Dressed in a flowery cowboy shirt, cowboy pants and boots, Buddy leans into the microphone. Dancers join together close; be it love for a lifetime or one night. The song echoes the post-WWII honky-tonk scene in Phoenix; “Slowly, you’re winning a heart that can be true.”

The honky-tonk scene in Phoenix included a litany of clubs and dance halls. Vern & Don’s, where Frankie Starr gave Glendale’s Marty Robbins his start. The Stag, Sciotts Ballroom, the Cactus Garden, the Bridge. The raucous Sarg’s Cow Town, where the Russian farmers from Glendale awaited their Saturday night fight with the cowboys. The nearby Riverside Park Ballroom, where thousands danced to Bob Fite and his Western Playboys. The Silver Saddle where Johnny Dakota sang. Chester’s in Glendale. Saturday nights at Madison Square Garden, where a young Phoenix disc jockey, Ray Odom, promoted big-name Country artists appearing in the Garden’s wrestling ring. The seats were pushed aside as 3,000 danced to the music of Buddy Long and the Sunset Riders until three in the morning, with vocals also supplied by Chuck “Eloy Flash” Mayfield and teenager Jimmy Spellman.

Among all the honky-tonkers, Buddy Long stood out for his crowd pleasing charisma. “Buddy knew hundreds of songs,” says Buddy’s drummer Terry Wells. “He sang them like the one you wanted to hear.”

“He knew the best dancers in Phoenix,” remembers Duane Eddy, the Rock and Roll Hall of Famer who played guitar for Buddy from 1956-58. “Whenever Buddy played a new location, he’d call them up and invite them out. Watching those people dance would inspire others to get up and try their own fancy steps. That created a powerful thirst for all. The clubs sold more booze on the nights Buddy worked than any other band.”

By the mid-1950s, the times changed. After a tour in Texas, Chuck “Eloy Flash”?Mayfield returned to Phoenix in 1955 with the news.

Duane Eddy remembers that “Chuck [was] enthused about a new singer he’d toured with. Chuck explained, ‘This guy is tearing ’em up down there. He’s amazing. The girls go absolutely crazy for him.’

“Then Chuck added, ‘He sings kinda funny, more like a black guy.’” That was the first Phoenix sighting of Elvis.

After that, for Buddy and his Western Melody Boys, Rockabilly joined Country to create a local music explosion.

“Jimmy [Dell] played the piano like Jerry Lee Lewis, before we ever heard of Jerry Lee,” Eddy says, “so, together with Buddy, we fit right in with the changes. When Johnny Cash, Carl Perkins, the Everly Brothers and Chuck Berry came along, we learned the songs and did them at the dances we played.”

Eddy himself had devised his distinctive low, twangy sound in collaboration with producer Lee Hazlewood, who had been the first DJ to play Elvis locally. Eddy’s song “Rebel Rouser”?was a breakthrough hit in 1958.

By 1959, these young men of the honky-tonk scene in Phoenix gathered their own careers. Terry Wells headed for Nashville as the drummer for Dottie West, while Hazlewood sought and found fame and fortune in Hollywood.

Buddy played on. In spite of recordings on small, regional labels, his songs never approached chart sales. He went on tour: playing Reno, taking dates in Oklahoma and playing lucrative summers in Alaska during the pipeline years.

By the early 1960s, Waylon Jennings, a future outlaw cowboy icon, arrived in Phoenix, playing newer local clubs, JD’s and Mr. Lucky’s. When he moved on and established a presence in Nashville, Tennessee, he invited his friend Buddy to join him on the road as the bass player.

Buddy returned to Phoenix within a year, finding club dates where they still came to hear the lanky redhead sing his songs for the working man. “I got tired of the driving,” he told an interviewer. “I should have stayed with him. Waylon told me I’d never do anything in Phoenix.”

But Buddy loved only Arizona. He settled in Spring Valley, north of Phoenix with Terry Wells as a neighbor. He married his beloved Teddy. He played local venues until illness took its toll in spring 2008. He died in his 79th year, in the early morning hours of a June day.

Today, the honky-tonks have pretty much bit the dust in Phoenix. Yet every now and then, a cowboy steps up to a stage, leans into the microphone, and we hold our breaths. Is he our next ticket?