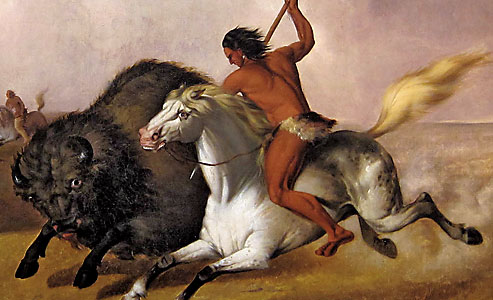 Big game hunters will tell you that the large mammals of this earth are hardy critters who can take a pretty good dose of lead and still keep on trucking.

Despite magnum rifles with cartridges that look more suited for battleship barrages, many African hunters have learned this lesson the hard way, ending up as bloody hoof prints or as some feline’s lunch. Yet we know that the Plains Indian regularly downed the American bison, a notoriously cantankerous beast, with nothing more than a bow and arrow, or a lance.

I have to admit, many times I have laughed myself silly watching Hollywood renditions of Indians running buffaloes. The sight of an actor in feathers and a breechclout using his little toy bow and single arrow to drop a stampeding, half-ton bovine as if struck by a lightning bolt has provided many hours of scoffing. But the fact remains that Indians did kill buffalo with such weapons. Much like the Ice Age mammoth hunters must have thought, when you pack that much potential sustenance into one beast, somebody is going to figure out how to kill one of them, and darned efficiently.

Archery hunters know that a well-placed arrow through the heart will down just about anything. But the thought of shooting buffalo from the back of a horse running over rough ground, even at point-blank range, seems to be a practice that would require a large quiver of projectiles. Surely, there were mighty hunters who could regularly bring home the rib eye before they ran out of ammo, but it’s easy to surmise those types were the exception and not the rule. Some historical accounts relate how individual warriors marked their arrows for ownership. I always assumed that this was to settle any arguments over the half-dozen twig missiles buried into a dead buffalo.

But a few years ago, I had to humbly admit that I was guilty of the same lack of “outdoor common sense” that I often feel deskbound scholars possess. Although I have owned and butchered many buffalo, my assumption about the Plains Indian practice was in err.

My first inkling as to how mistaken I was came upon reading Charles Goodnight’s tale of observing a Mexican cibolero hunting buffalo with a Comanche-style lance. Killing a buffalo with a lance had always seemed like an inefficient way to hunt when a bow and arrows were available; I had always considered the lance as more a weapon of war than of the hunt. After all, a lance was a one-and-done weapon, right? But whoa, hold up your buffalo pony. Goodnight reported how the cibolero ran alongside the buffalo and stabbed it dead with the long, 14-inch blade of his lance, then rode on and poked several more in the course of a few miles before his horse became winded.

Hollywood’s idea of the Indian lance has usually been a weapon that could be thrown like a spear, but an eight-foot shaft was not designed for throwing. It was made to pierce an enemy or to thrust into the vitals of a running buffalo from the back of a horse. The lance head was long and needle-pointed, and in the 19th century, it was made of hoop-iron scraps salvaged from raids on the settlers. There are even records of the Indians using cavalry saber blades for the business end of their lances.

Dances With Wolves, the unmitigated king of the “Indian” movies, made a valiant and exceptional attempt to portray the Sioux chasing a buffalo herd. Who doesn’t remember the scene of the warrior riding alongside his prey and chunking his spear into the animal’s boilermaker, making it drop into a lifeless, skidding heap of dusty hide and bone? But the cibolero, who learned his skill from the Comanche, never threw his spear. He just rode alongside the buffalo and pool-cued the heck out of it until his horse was tired, or he decided that Mama had enough skinning to tend to for the rest of the afternoon. Apparently, buffalo weren’t near as hard to kill as I once believed.

I figured out why that was the case after a talk I had with a doctor friend. It seems that most doctors are packing around a certain knowledge that has long avoided many Old West historians. There is a human physical abnormality known as Buffalo Chest, or Buffalo Lung. People suffering from Buffalo Lung have not two, but a single lung cavity. Wouldn’t you know it? The condition is named after the American bison, one of the few mammals that have this anatomical peculiarity.

Humans, with our double-lung cavities, may suffer the puncturing or collapse of one lung, and perhaps still get enough oxygen to survive until something can be done about the injury. Poke a hole in a buffalo’s lungs through either side of its ribs, and its entire lung system deflates like a single balloon. A lung-shot buffalo might keep on running for a ways, but it isn’t going to survive the trauma.

My manly pride thoroughly humbled, I will never again experience that same joy I once felt when I watch Sunkmanitu Tanka Owaci and Wind in His Hair race along with the thundering herd. Never again will I envision lean, half-naked savages on their swift ponies testing their prowess against the mighty grazers of the plains. Forevermore will I have stuck in my head the odd picture of a slim Minnesota Fats with a hustler’s smile, jaunting along with the herd and poking one buffalo burger after another into the corner pocket with his one-piece pool cue. And it’s all because the cantankerous buffalo didn’t have the good sense to have normal lungs.

Southeastern Oklahoma horse trainer Brett Cogburn is the author of the novel Panhandle and the short story collection The Devil’s Hoofprints.