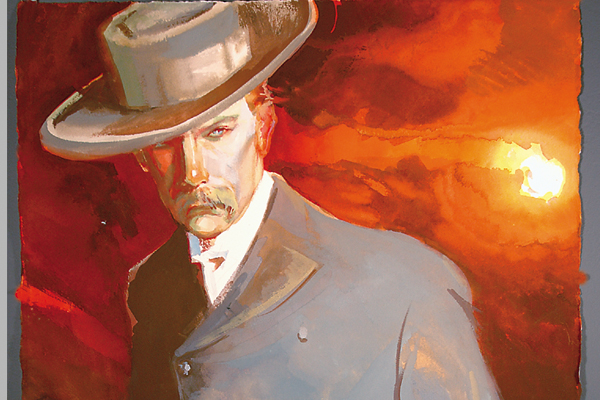 “Never play cards with a man called Doc. Never eat at a place called Mom’s. Never sleep with a woman whose troubles are worse than your own.”

Gambling may just well be the world’s second oldest profession. As poker worked its way west, card cheats had sources for their needs. The firm E.M. Grandine in New York City provided so-called “advantage” or marked playing cards. From 1837 on, Doctor Cross & Co. in New Orleans manufactured marked decks and by 1850 at least a half-dozen firms turned out “advantage” cards, openly advertising their wares in newspapers.

Grandine also marketed cheating contraptions, such as “bags” to be fastened to the underside of a table allowing cheats to insert and withdraw cards at will; and sleeve and vest “holdouts” for access to cards hidden on the body.

In 1902, S.W. Erdnase (a mysterious surname that spelled backwards is E.S. Andrews) published The Expert at the Card Table, the first known book about card cheating. It outlined step by step his systems of false shuffling, false riffling and cutting, dealing from the bottom of the deck and palming cards.

Here’s some cheats and terminology to learn before you can be an official cardsharp.

Mechanic’s Grip: A way of holding cards to perform sleight of hand maneuvers.

The Peek: A maneuver that allows the dealer to see the top card before the deal.

Second Deal: A method of dealing the second card instead of the top card.

Bottom Deal: A method of dealing cards from the bottom of the deck.

Collusion: When any number of players, usually two, work together.

False Shuffling: One can keep the bottom card on the bottom; move the bottom card to the top;  keep a number of top cards undisturbed; and man-ipulate the positions of the cards in
the deck.

Palming: Secretly hiding a card in the palm of one’s hand.

Cold Deck: Usually a one-time maneuver when a player introduces a deck with a certain number of cards in prepared places.

Marked Cards: Cards that are printed or altered in some fashion so their value is known by looking at the backs.

Holdout Machine: A mechanical device used to switch cards in and out of a person’s hands.

Angling: When a player folds or signals to bet before it is their turn.

Skinning the Hand: A technique for getting rid of extra cards.

Then Learn the Language

Under the Gun: The first to bet.

Monster: A hand that is almost certain to win.

Pocket Rockets: A pair of aces in the hole.

Crossroader: An old term used to denote cheats, having its origin in the Old West practice of cheating in saloons located at crossroads. Applicable today to cheats who frequent casinos.

Ear: A bent corner put on a playing card by a cheat to identify it.

Hand Mucker: A cheat who specializes in switching cards.

Heavy Hand: A hand of cards that consists of one or several extra cards unknown to a cheat’s opponents.

Hole Card: In blackjack and stud, the hole card is the card face down and revealed at the showdown.

Quads: Four of a kind in poker.

Luminous Readers: Cards with marks unreadable without the use of a special visor, sunglasses or contact lenses.