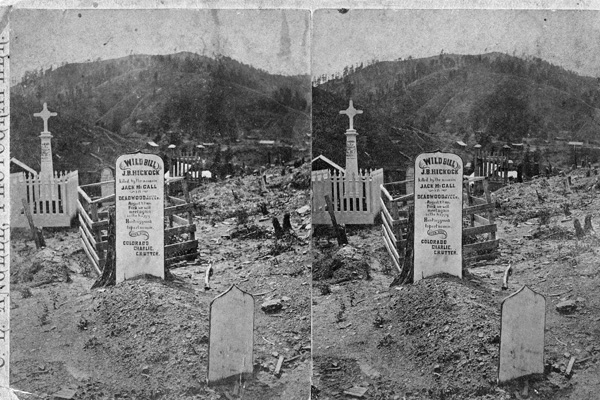 In the good old days, Wild Bill Hickok was reported as being a very cool customer. He remained calm during an argument or gunfight and never lost his head. Not while he lived, that is.

To get quickly to the heart of the story, we must go back to Bill’s burial in Deadwood, South Dakota, in 1876. The great gunslinger was originally interred in Boothill, but later on his body was exhumed and buried in Mount Moriah Cemetery. To date, his grave has been decorated by no less than five markers, two of wood, two stone and one life-size statue, also stone.

The original wood marker was placed on Hickok’s grave by a close friend, C.H. Utter, who has these words inscribed:

Through the years, Wild Bill’s grave has been visited by hundreds of tourists, and—like all people the world over—many were souvenir hounds. Take-home souvenirs were practically nil as far as Bill’s grave was concerned—but there was always the wooden marker. Years ago, most tourists didn’t lug cameras, so in lieu of pictures, they hacked off pieces of the marker. Eventually, in order to preserve the marker for posterity, it was removed. Now [1959] it is on exhibition in the Wild Bill Bar, the authentic scene of his death.

The next marker was stone. It was too heavy to carry away and too hard to chip—or so everyone thought. The souvenir hounds must have had a sixth sense, for they apparently came equipped with miners’ picks or sledge hammers. Anyhow, chip by chip, the stone disappeared.

The next stone marker suffered the same fate, and it was replaced by a life-size statue, also stone. A protective fence was erected around the grave, but the vandalism started again on a minor scale.

Years passed. The statue stood guard over the grave without suffering much damage until one day during World War II, the head was discovered to be missing. It has never been recovered, nor has the identity of the person who took it ever been established.

The headless statue remained on the grave for a number of years before it was removed and placed in the Adams Memorial Museum in Deadwood. The present marker is a replica of the original wooden one erected by Bill’s pal, Charlie Utter.

Some doubt exists as to when the last two stone markers were erected, or by whom. I have been unable to pin down names or dates. The first marker was believed to have been erected in 1891, the artist being J.H. Riordan.

So there you have the story of how Wild Bill lost his head, 67 years after he died! A record, don’t you think?