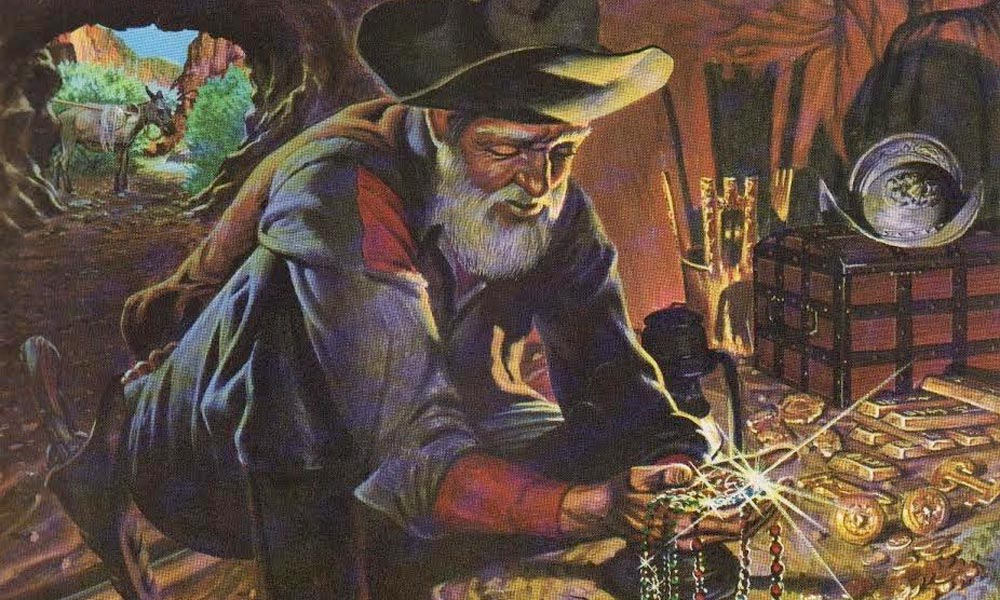 Arizona is a wild, untamed land of jagged mountains and barren deserts making it an ideal place for lost mines and treasures.

These lost treasure tales can lead one down the path of plausibility and you have to figure out when to its time to get off. Such as it is with Hualapai Joe’s lost loot. Hualapai Joe Desredo wasn’t Arizona’s most notorious outlaw but he played a role in one of Arizona strangest lost treasure tales.  On a June night in 1880, in Mohave County, Hualapai Joe and two cronies held up the westbound stage running from Beale Springs to Fort Mohave on the Colorado River.

That night, the stage driver, Johnny “Jump-Up” Upshaw and three passengers were stopped by the outlaws somewhere south of Beale Springs, where Kingman is today, robbed the three passengers on board and took the strong box.  The box was made of wood, reinforced with iron and contained some $200,000 in gold ingots from the mines in Mohave County.  It proved to be too heavy for the outlaws to carry on horseback so they ordered Johnny Jump-Up to leave pronto.  The stage driver cracked his whip and the stage disappeared into the night, literally disappeared.  It vanished into thin air and neither the driver nor the passengers were heard from again for the next sixty years.

Hualapai Joe and the boys buried strongbox full of gold, and shortly after they were jumped by a posse that had been hot on their trail from another robbery at Mineral Park.  In the ensuing gun battle, two gang members were killed and Hualapai Joe was mortally wounded.  Before dying he admitted holding up the stage; a small leather sack full of gold was found in his pocket.  He told lawmen he’d also taken the strong box and buried it in a shallow hole of sand, intending to come back later and retrieve it.

He also told them that after he’d sent the stage on its way a strange thing happened—the stagecoach suddenly vanished.  Despite a careful search, the loot was never recovered.  The vanished stagecoach, well there’s more to that story.  A representative from the stage line came out and investigated but he fared no better.  There was no trace of the missing stage, its driver and passengers.  It was said the local Hualapai Indians, who knew the land like the back of their hand went looking too and they also came up empty-handed.

The stage remained lost until 1940 when a recluse named Max Borden came across some bleached human skeletons near an old decaying stagecoach.  They were resting in a wide fissure at the bottom of a deep ravine not far from the old stage station at Yucca.  Borden was convinced he’d found the missing stagecoach.  He didn’t say anything about his find, perhaps hoping to locate the missing strong box before treasure hunters stampeded into the area.  In Black’s Saloon in Flagstaff, he approached an Arizona writer named Gladwell Richardson and asked if he knew anything about the robbery and lost gold. Richardson then talked to an old timer in the Kingman area he knew named Asa “Ace” Harris.  Harris was a former deputy sheriff, remembered the robbery and said the story was all true.

Truth be told, Richardson could color a story redder than a Navajo blanket; he mainly wrote novels, under the pen name Maurice Kildare, and he never let truth get in the way of a good story.

Richardson and Borden met again four years later at Borden’s camp near Yucca.  He invited the writer to accompany him on burros into the desert.  “Got something to show you,” he said.  After swearing him to secrecy, Borden took him to the sight.  Sure enough, there was the weathered stage, nearly buried in the sand.  It seemed the mysterious stagecoach had been found.  It was figured the frightened driver, Johnny Jump-Up was in a hurry and unable to see that he’d driven the stage into the deep ravine. The bank caved in and covered it up.   But where was the missing gold.  It’s still out there—somewhere.