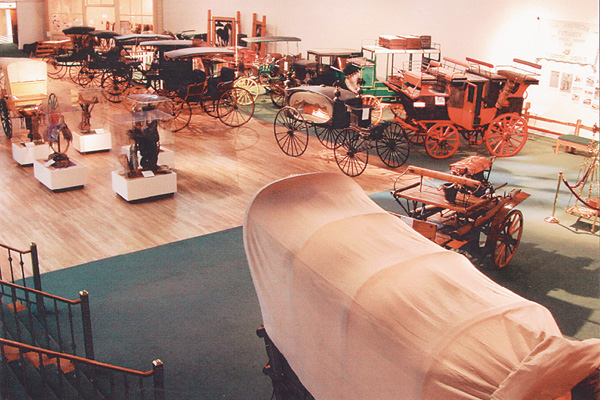 When the “Gunfighter” comes to the Hubbard Museum of the American West this summer, it will be the latest in a string of impressive displays that have made this Smithsonian Institution affiliate a major contribution to the cultural heritage of the horse and the American West.

The Hubbard, on Highway 70 in Ruidoso Downs, New Mexico, is one of America’s newer history museums. Founded in 1989 to handle the extensive personal art collection of R.D. and Joan Dale Hubbard, it quickly expanded and offers five major features:

• The Museum of the Horse exhibits 10,000 objects from the Anne C. Stradling Collection, including bits, spurs, bridles and saddles from around the world.

• The Ruidoso Downs Race Horse Hall of Fame opened in 1997 with one of the most extensive collections of horse racing artifacts. The track is home to the $2 million All American Futurity, the world’s richest and most coveted Quarter Horse race.

• The annual Lincoln County Cowboy Symposium has been operated by the museum since 1995. Poets and musicians perform almost nonstop, and a highlight is the world-renowned chuck wagon cookoff. The symposium has been touted as the “nation’s leading cowboy heritage event.”

• The Billy the Kid National Scenic Byway Visitors Center is operated by the museum and the village of Ruidoso.

• Historic Lincoln has landmark buildings with historical ties to Billy the Kid, Pat Garrett, Lew Wallace, the Buffalo Soldiers and cattleman John Chisum. Several properties are currently being preserved through a “Save America’s Treasures” grant from the National Park Service.

The newest addition to the museum’s list of accomplishments is “Gunfighter—Historic Insight into the Lawmen and Outlaws of the American West,” which opens May 24 to Oct. 26 and is presented in collaboration with True West.

The Hubbard Museum of the American West, one of New Mexico’s most significant museums and its only Smithsonian affiliate, is worth a visit, whether there’s a gunfighter in sight or not.