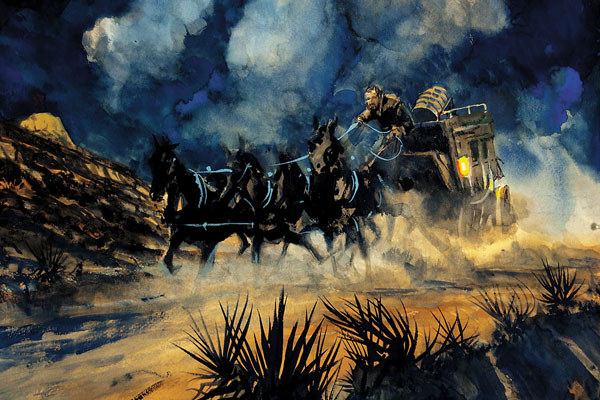 Two California boys are riding the box on this chilly night along the San Pedro River bottom in Arizona. Eli “Bud” Philpot, a top-rated stage driver who hails from Calistoga, California (about 60 miles north of San Francisco), and

shotgun messenger Bob Paul, all six feet four of him, a former sheriff of Calaveras County (southeast of Sacramento). They are about halfway to Benson, after leaving Tombstone several hours earlier.

After passing through Contention City, the Kinnear & Co. stage (with a reported $26,000 cargo) rumbles north about two miles. While the stage goes up a small incline, 200 yards short of Drew’s Station, a dark figure steps onto the road from the east side and calls out, “Hold!” Without even a pause, Paul roars back, “I don’t hold for anybody!” and shoulders his double-barrel shotgun.

At the same time, more men step out of the brush and both sides fire as one. Hit in the crossfire, a mortally wounded Philpot takes the lines with him as his lifeless body falls “heavily forward between the wheelers [the two horses closest to the wheels],” causing the entire team to “immediately [spring] forward into a dead run.”

Riding atop a careening, driverless stage, Paul answers back shot for shotas angry outlaws step onto the road and empty their rifles at the disappearing stage.

The stage blows by Drew’s Station, where its employees, upon hearing

the commotion, come running out. Swallowed up in the darkness and finally out of range, Paul has no choice but to jump down onto the wagon tongue as the stage perilously lurches and bounces toward imminent disaster. He works hard to keep his balance with one hand and capture the flailing, slithering lines with his free hand. After a good mile, Paul grabs enough of the “ribbons” to bring the horses to a stop.

Worried that the road agents might follow on horseback, Paul quickly takes stock of the nine, very shaken passengers and discovers that Peter Roerig, who has been riding on the dickey seat atop the stage, is badly wounded. Paul retakes the box and pushes the team to Benson without further incident. From Benson, Paul sends a telegram back to Tombstone with details and a plea to alert the local authorities (he also includes a statement that Roerig “could not possibly live,” and he did die).

Below Drew’s Station, Paul finds the employees with “poor ‘Budd’ [sic] lying dead in the road.” The station agents tell Paul how they came out after the shooting and witnessed the “murderers fleeing rapidly from the place.”

One of the suspects in the ill-fated Benson Stage Robbery on March 15, 1881, is none other than Doc Holliday. Although the stage escapes before the robbers get their money, the bandits kill the stage driver and a passenger.

Holliday is tight with the prime suspect, Billy Leonard, who the gunfighting dentist knows from their gambling days in Las Vegas, New Mexico. On the afternoon of the robbery attempt, Holliday reportedly “engaged a horse at a Tombstone livery stable,” saying, “he might be gone seven or eight days, and he might return that night.”

He is seen departing Tombstone at four p.m., armed with a Henry rifle and a six-shooter. He returns his “fagged out” horse between 10 and 11 the same evening. His girlfriend Kate Elder later signs an affidavit admitting his involvement in the robbery.

Holliday is ultimately released for lack of evidence, but more than one person close to the case felt he was involved. Holliday allegedly answers the allegations by quipping, “If I had pulled the job, I’d have got the $26,000.”

Behan took the prisoner back to Tombstone, while Paul, the Earps and others continued the pursuit, tracking the desperados up over Redington Pass and clear around the Rincon Mountains. After a rendezvous in the Dragoons, Wyatt and Masterson “hoofed it” back to Tombstone, while Virgil and others trailed the brigands all the way to Cloverdale, New Mexico, without success. The officers logged almost 500 miles in the saddle.

Wyatt got a double load of bad news when he returned to Tombstone. He found out Behan had appointed Harry Woods as his undersheriff (Earp was led to believe he would get the nod). Based on rumors of a Cowboys-led jailbreak, Wells, Fargo detective Jim Hume and Wyatt requested that Luther King be put in irons. Fifteen minutes later, King simply walked out of the jail and escaped on a horse tied out back.

Recommended: When Law Was in the Holster: The Frontier Life of Bob Paul by John Boessenecker, published by University of Oklahoma Press.