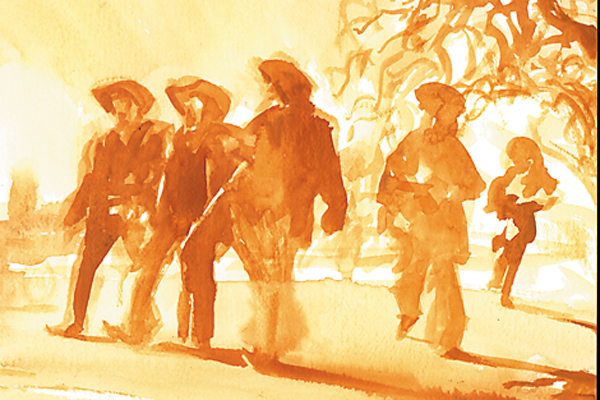 A heavy rain has drenched the Bonito River Valley. The formidable men walk east down the center of the muddy street, picking their way around the bogs.

After his light-hearted exchange with Mrs. Mills, Sheriff Brady hur-ries to catch up with his men.

As the lawmen pass John Tunstall’s store, a storm of bullets sweep the street. Shooting from behind a 10-foot-high adobe wall, the concealed gunmen mow down Brady and Deputy Hindman. The sheriff has been hit by a dozen bullets.

Sitting in the middle of the road, Sheriff Brady groans, “Oh, Lord,” as he tries to rise, but another volley of shots riddles his body. He falls over, dead.

Deputy Hindman moans and cries out for water. Ike Stockton emerges from his saloon, rushes up the street and attempts to pull the wounded deputy to safety. As he does, Hindman is hit again. He dies in the street.

The shooting stops. It is quiet except for the distant barking of dogs.

Suddenly, two men sprint from the Tunstall corral into the street. “Big Jim” French covers William Bonney (a.k.a. Billy Kid). The Kid straddles Brady’s body, perhaps looking for warrants  or wanting to retrieve the Winchester rifle the sheriff took from him on February 20.

From his position in the Cisneros’ front yard, Deputy Mathews takes aim and fires. His bullet clips Billy Kid’s hip and rips through French’s left thigh.

The Kid gives up his scavenger hunt, and he and French hotfoot it back to the safety of the corral.

Tunstall’s main pard Rob Widenmann opens the north gate of the corral and all the Regulators mount their horses except French, who can’t swing his leg over the saddle.

Six horses thunder out of the compound, heading east along the Bonito River bottom, unseen by the deputies up on the main road. As the Regulators meet the road just east of the Ellis Store, however, they are fired upon by the deputies. But the boys are out of range, and they escape.

Comrades of the dead sheriff soon come looking for the perpetrators, but French is successfully hidden under the floorboards of Tunstall’s store, and he later escapes.

Billy vs Brady Back Story

Sheriff William Brady arrested William Bonney (Billy Kid) and two others on February 20, 1878, when the Kid tried to serve the sheriff and his deputies with warrants for the murder of John Tunstall.

The two warring factions in the Lincoln County War: Murphy-Dolan vs. McSween-Tunstall had been fighting over the mercantile and ranching interests in Lincoln County. As things turned nasty, Tunstall was murdered by a rogue element of Sheriff Brady’s posse. Subsequently, the Kid and Richard Brewer swore affidavits against the posse members, including Brady, and got murder warrants issued by a friendly judge in a nearby town.

But instead of surrendering, Sheriff Brady and his deputies overpowered Billy and two fellow Regulators. Adding insult to injury, Brady took the Kid’s Winchester (allegedly given to Billy by Tunstall).

The Kid was further humiliated when Brady imprisoned him in Lincoln’s notorious pit jail. To boot, while he was in the hole, Billy missed Tunstall’s funeral.

So Billy Kid had plenty of motives for the ambush. Plus, he wanted to retrieve his favorite weapon.

The night before the ambush, the Kid and  other Regulators slipped into Lincoln unnoticed and ensconced themselves in the Tunstall store and corral. Technically part of Rob Widenmann’s posse, the crew was determined to gain control of Tunstall’s property. Sheriff Brady had previously commandeered the estate until Widenmann and soldiers from Fort Stanton forcibly evicted Brady’s men.

Debate still rages over whether the Regulators planned this ambush, or if they merely saw an opportune moment. Also debated is the purpose behind Brady and his deputies’ walk down Lincoln’s main street. Some historians say Brady was going to the courthouse to post an official affidavit, while others claim he and his deputies were planning to arrest lawyer Alexander McSween when he rode into town.

Logic would dictate you don’t need four armed deputies to post an affidavit. It’s probably safe to say, the lawmen were going to arrest McSween, and in fact, he did arrive shortly after the ambush and rode by the dead sheriff who was still lying in the street.

The ambush and killing of Sheriff William Brady hurt the Regulators’ credibility as a lawful entity and lost them sympathy for their cause.

Three days after the Brady ambush, the Regulators landed at Blazer’s Mill and shot it out with Buckshot Roberts (see Classic Gunfights, April 2003 or buy the book, Classic Gunfights Vol. I).

Some three years later, Billy Kid (by then known as Billy the Kid) was captured and tried for killing Sheriff Brady. Found guilty and sentenced to hang, the Kid told a reporter, “I think it hard that I’m the only one to suffer the full consequence of the law.” He had a point. Some seven men had shot at the sheriff, and it is unknown which of them killed the sheriff and his deputy. Although some lawyers believe the murder charge probably wouldn’t hold up in court today, any betting man would agree that the best odds are with the House, and that it’s safe to assume Billy was one of the killers.

Recommended: The Illustrated Life & Times of Billy the Kid by Bob Boze Bell, published by Tri Star–Boze Publications; and The Lincoln County War by Frederick Nolan, published by University of Oklahoma Press.