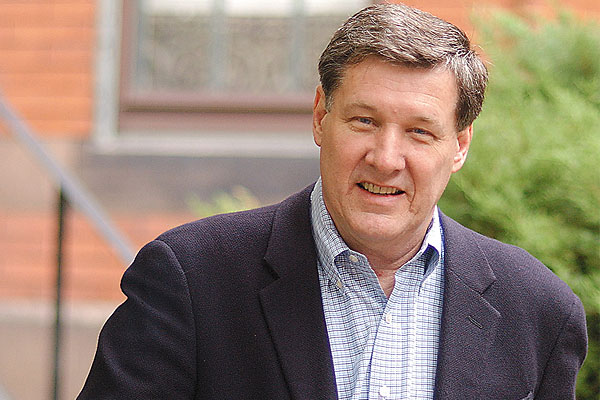 Before you dismiss Thomas Eidson as some Easterner who doesn’t know a whit about the Old West, think again.

Sure, Eidson is executive vice president in charge of corporate affairs at Fidelity Investments, where he works in a Boston skyscraper. Sure, before that he was CEO at New York-based Hill & Knollton, then the world’s largest public-relations firm. And, yes, he was even a biology major in college.

But Eidson, 59, knows and loves the West. That’s why he’s up at 4:30 a.m. and writing till 8 a.m. before walking to work to handle Fidelity’s corporate communica-tions. That’s why he’s writing again for two or three more hours after dinner. Besides, he’s not really an Easterner.

“My father was a wheat farmer who turned into an accountant and came to work at what was Douglas Aircraft Company,” says Eidson, who was born in Los Angeles. “My grandmother, Rose Eddy, was one of the few women to homestead successfully in Kansas with her sister. My maternal grandfather was an Indian agent on the old Fort Sill, Oklahoma, reservation. My grandmother had her house burned by Indians. My great-grandfather on the paternal side was a cattle rancher on the Cimarron. My paternal grandfather had a cattle ranch in the San Juans. So I come from a long line of farmers and Westerners.”

Eidson made an explosive debut in the Western literary world in 1994 when Western Writers of America awarded St. Agnes’ Stand the Spur Award for Best Western Novel and the Medicine Pipe Bearer Award for Best First Novel.

That book, about a pursued man who tries to save a group of orphans and nuns trapped by Apaches, has been optioned by Steven Spielberg, with Martin Scorsese attached to direct. His second novel, The Last Ride, was turned into the 2003 movie The Missing, directed by Ron Howard. Eidson followed The Last Ride with the critically acclaimed All God’s Children, and he’s working on a novel set in Los Angeles in the late 1800s.

“The Americans took over [California] in the 1840s, but they really only took over the northern part of the state,” Eidson says of his novel-in-progress. “They left the big Mexican land grant ranches down in the southern part of the state during the gold rush period alone. So the great ranches held on, and it was only when the railroads came across and started to promote cheap fares, etcetera, etcetera, that they really got a huge influx of people and they began to bust up the culture.”

Chances are, religion will be an important theme in that novel. “It almost always is,” he says.

That’s in his blood, too. Eidson is a descendant of Mary Baker Eddy, the New England founder of Christian Science.

“I’ve always had an interest in humanity and religion,” he says. “No one in my family is a Christian Scientist, but I’m fascinated by the power of religion over people.”

That works well in Westerns, he says.

“I think they’re all basically morality-based books—that’s what the English call them—and hopefully there’s more to it than that. It offers a great black and white morality play. I think that’s one of the reasons I like to write about the West, because it was a time when we did not rationalize everything. Good was good, bad was bad and there were demarcation lines and if they got blurred, you knew it immediately and there was not much that was forgiven about it. So I think it’s a good place to tell a morality story.”