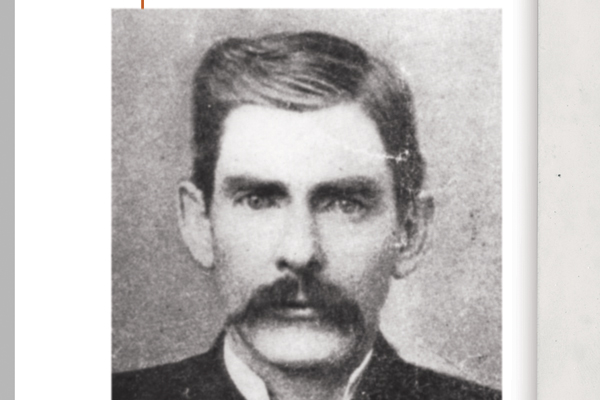 When we see an Old West photograph in a book or magazine, can we believe the subject is who or what it is said to be?

At one time, I believed everything I read or saw in a book. But then I learned that not everything in books is true.

Realizing this, I set two goals when I began collecting original photographs of the Old West: collect only photos that I think are authentic, and do what I can to improve the accuracy and quality of published photos in my collecting field. Both have been a challenge.

Many of the Old West characters we “love”—Jesse James, Billy the Kid—were outlaws whose survival depended on being obscure. Accordingly, they rarely frequented photographers’ studios. Others who are well known today—Wyatt Earp, Doc Holliday, Bat Masterson—were not famous enough in the 1880s for their photos to have been reproduced in large quantities for sale to the public. Most of their photos were originally owned by family or friends, and because they lived on the frontier, those photographs were few.

A number of books on the Old West contain bad or misidentified photos. Some writers spend years researching, wanting to find and verify every available fact. Then, at the last minute, they scramble to locate photos, often accepting poor quality images that have been used repeatedly. In addition, many have been poorly retouched, distorting the original image. Worse, there are a few individuals who have regularly provided writers with erroneously identified photos that then appeared in otherwise excellent books.

A million to one

The chance of finding an authentic photo of famous Old West characters in a flea market or antique mall is a million to one. Photos coming from present-day descendants are also often incorrect, especially when the photos don’t have an early identification or the subjects aren’t easily recog-nizable. Families want to own photos of famous people. An acquaintance once told me his family owned a photo of Pat Garrett. Through the years, the family had passed down the photo to succeeding generations, eventually misidentifying the man as Garrett instead of Wayne Brazil, the man who killed him.

Misidentified photos frequently find their way into libraries and museums where the personnel may not be qualified to screen out those that are incorrectly identified. Then, just by being there, the photos are considered authentic and are used in publications, further “authenticating” them.

Misidentification is often an honest mistake or wishful thinking. There is a great deal of the latter because of the high values attached to photos of famous Western characters. Although old photos are antiques, not all old-looking photos are antiques. Fakes do exist. For a photo to be fully accepted, it must meet certain standards.

The late Noah H. Rose collected photos during the 1930s-40s and provided them, at a price, to authors and publishers. Most of the photos were copy prints. Because many of Rose’s images were unclear, he often touched them up. In my opinion, Rose provided a service by preserving many authentic photos, but he did a disservice by his alterations.

Many of Rose’s retouched photos appear in The Album of Gunfighters, which Rose co-authored with J. Marvin Hunter in 1951. Most of the identifications in the book are accurate, however, I think the photos are of poor quality. Two erroneous photos of Sam Bass are “exposed” in the book, although they continue to be used to this day, and the only photo which I believe to be Bass is also included.

A photo’s authenticity is best determined by:
1) Contemporary identification on the original photo.
2) Identification by someone who knew the individual.
3) Comparison with a known authentic photo.
Number 3 is unreliable if the comparison is not obvious. People see pictures differently, and some see similarities that aren’t there because they want the picture to be of someone it isn’t. A good rule is to never purchase an antique photo without examining it first.