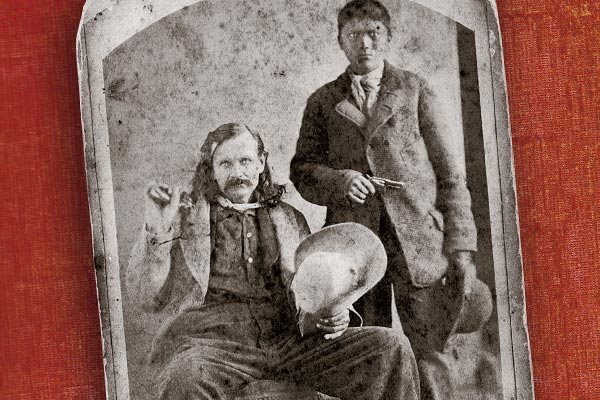 “Go west young man and grow with the country,” wrote one news reporter, and, at 17, Jack Swilling went west to do just that.

Born John William Swilling on April Fools’ Day in 1830, in Anderson County, South Carolina, Jack and his brother, Barry, landed first in Georgia.  There, Jack enlisted himself as a musician under the name Jackson W. Swilling. The brothers fought in the Mexican-American War and were discharged soon after, in 1848. They returned home to enlist in the Georgia Cavalry.

A decade later, Jack’s desire to strike gold brought him to Arizona, where a Pima Indian guide led him and his party to the gold mines of Rich Hill, near Weaver Creek, and other mining claims.

Census records show that Jack was in New Mexico in 1860. He was set to return to his claims in Arizona when the Civil War stopped him in his tracks. He enlisted and was soon promoted to the role of captain for the Gila Rangers militia company. Settled in Arizona’s Fort Fillmore—which was claimed as part of the Confederacy—Jack defended the Confederates until he refused to requisition livestock for their cause. Shortly thereafter, he deserted Fort Fillmore and switched to the other side. For $75 a month, he delivered the mail for the U.S. Army and was listed as a Union spy and scout. Three months later, he was discharged.

A veteran of war, Jack became an express rider for the U.S. mail. While on his route between Prescott and the Pima villages near Tucson, he saw potential for growth in the Salt River Valley. The Hohokam had settled on this land in 600 CE, building an irrigation system by hand, using digging sticks.

In 1867, Jack restored the Hohokam’s canals to improve the flow of water into the valley. Shortly after, the Swilling Irrigating and Canal Company was born. The canal project irrigated homesteads and farms and allowed businesses of the area to flourish. By May 4, 1868, Phoenix was recognized by the Yavapai County Board of Supervisors as an official district. That June, Jack became the postmaster for the area.

In the years that followed, Jack became addicted to opium and a serum called Perry Davis’s vegetable painkiller, which contained morphine and alcohol. Due to injuries he had incurred during the Civil War, he used these drugs to medicate his unbearable pain. In an attempt to sober him up, his friends George Munroe and Andrew Kirby planned a trip with him to the mining settlement of Gillett, so they could bury the remains of a dear friend, Col. Jacob Snively; he had been hastily buried after perishing in an Apache attack in 1871, eight years earlier.

In the spring of 1878, word got out that a Wells Fargo bank robbery had taken place near Wickenburg. An intoxicated Jack joked that he and his two friends were guilty of committing the crime. The three were taken to a prison in Prescott and then were moved to Yuma, where they awaited their trial.

While Jack sobered up in prison, the shock of sudden detoxification took his life. He died on August 12, 1878. His body was buried in the rear of the county courthouse in Yuma. Exhumed in 1903 and reburied in Yuma, the Father of Phoenix lies in an unmarked grave.

Amy Ouzoonian is the Senior Editor at True West.

Do you know about an unsung character of the Old West whose story we should share here? Send the details to editor@twmag.com, and be sure to include high-resolution historical photos.