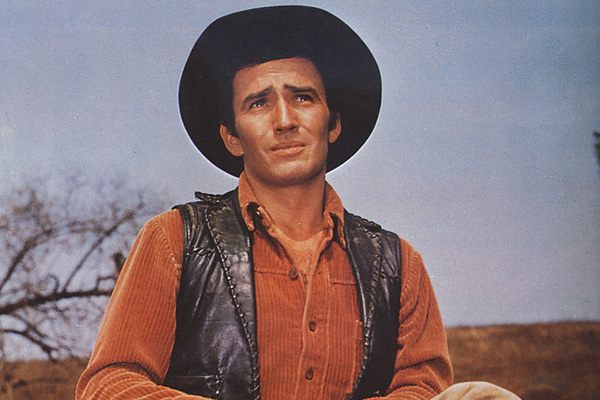 When Owen Wister published The Virginian in 1902, he created the  quintessential fictional Western hero (more than 60 years before Clint Eastwood made The Man With No Name popular) and gave birth to an American literary genre. Gary Cooper once played Wister’s hero on the screen, and more recently Bill Pullman, but for most of us, James Drury is The Virginian.

The New York-trained actor played the title role for nine years in NBC’s 90-minute television Western. Starring Drury and Doug McClure (who died of lung cancer in 1995), the show was a hit from the time it debuted. More than 200 episodes of The Virginian were filmed from 1962 to 1971, shooting the last season under the new title The Men From Shiloh.

Since The Virginian, Drury has been relegated to TV guest spots. Far from bitter over the lack of acting jobs, Drury is also far from retired. He has a variety of business interests, is narrating several Kirby Jonas’ Western novels on tape and is actively involved in celebrity cattle-cutting events as well as the Single Action Shooting Society. Best of all, Drury notes, he has been sober for 20 years—“and I’ve spilled more whiskey than you’ll ever see.”

True West: If you had a chance to play any historical Western character, who would it be?

TW: How did the role of The Virginian come about?

JD: It was 1962, and I was 28 years old. I had been in the picture business for eight years. I started when I was 20 in Blackboard Jungle at MGM, and I had been at 20th Century Fox for a couple of years where I made The Last Wagon, Love Me Tender—Elvis’ first picture—and Bernadine, Pat Boone’s first picture. I have the dubious distinction of having been Elvis’ older brother and Pat Boone’s older brother in their first pictures. That is a dubious distinction.

But I had worked in almost every Western series that was on. And then I had just been cast for Ride the High Country. They signed me to a contract at Universal, and I think they were already considering me for The Virginian but never told me.

So I was there as a contract player and they tested me for the role—three separate screen tests. All they said to me at the end of the screening, the first one, was lose some weight. So I lost some, and came back and they said lose some more weight. So in that 30-day period I lost 30 pounds. I ran my ass off, starved to death, and got the weight down. And after the third test was over, it was on a Thursday, and Doug McClure and I were both informed on that Friday afternoon that we would be starting production on Monday morning. That’s the preparation we had, and nine years later we were finished.

TW: How hard was it shooting that series?

JD: It was logistically a nightmare. We would shoot 74 minutes and 30 seconds worth of film in an average of eight days. Nowadays they take 20 days to make an hour show. So lots of time we had three and four units shooting three and four different Virginian episodes at the same time on the back lot. We would literally get on horseback and ride back and forth between the sets. Run in and say a few words here, and run in and say a few words there, and then come back over here and do an enormous 10- or 12-page scene in another episode and then go to another set and do another big 10-page scene. So, it was very confusing to my horse. But we were just young and tough and crazy, and nobody told us it couldn’t be done, so Doug and I went ahead and did it.

TW: Did you enjoy working with Doug McClure?

JD: Oh, one of the strongest, lifelong relationships I ever developed with anybody. I talked to him three times a week for 30 years, so it leaves a big hole when somebody like that goes. No matter where I was in the world, or no matter where he was in the world, I’d talk to him two or three times a week. That was the friendship. We always had something we had to say to each other. He died far too young, and it was a terrible tragedy.

TW: There was almost movie-like quality to The Virginian.

JD: We were the first 90-minute show with continuing characters, and we were the only one that was successful. Our writers could write great guest-star roles. Big, heavy duty guest-star roles. So we had the likes of Bette Davis, Joan Crawford and Robert Redford and George C. Scott and Colleen Dewhurst and Ralph Bellamy. The list just goes on and on of people who were willing to come work on The Virginian because of the parts. It gave me the chance to work with the cream of the crop. And it was exciting every morning because I’d wake up and think: I get to work with George C. Scott today. And that is a big deal. It was a big deal every day that anybody ever worked with George C. Scott because he was so brilliant.

TW: It was a good episode, too.

JD: It was. And we did a completely separate one with his wife. Colleen was one of the best actresses to ever work in English. And it was true about Bette Davis and Joan Crawford, you know, because they really didn’t get along. We did an episode with Bette first and we got to be real good friends, talked on the phone and she’d call to see how things were going. And as soon as I worked with Joan Crawford, I never heard from Bette Davis again or could get her on the phone.

TW: Speaking of actresses, Mariette Hartley says you and the other actors playing the Hammond brothers scared the hell out of her during Ride the High Country.

JD: She was scared of everything. I have a funny feeling she still is but couldn’t say for sure. She was great in the picture, though, she was great in the picture because that was the quality that Sam [Peckinpah] cast. She was like a deer in the headlights all the time. And it worked so well for what we were trying to do because the whole picture was about scaring her to death.

TW: Do you enjoy what you’re doing now?

JD: Very, very much. I have enjoyed every single day of my life, good or bad. I’m the type of guy who enjoys life doing what I’m doing. I would enjoy it a lot more being much more active on film and on stage. I’d like to work a lot more. People just don’t hire me.

TW: Do you think that has to do with the reputation you acquired during The Virginian?

JD: Undoubtedly. I am no one to trifle with. Give me a job and I’ll make your life hell on earth. Because I want to get it right. So everybody knows that. Even the people who are too young to know me from a bale of hay know that. And I literally have not worked at Universal since I finished The Virginian because of that, and their influence is pervasive. But it doesn’t bother me in the least. I got what I wanted out of it, which was a good show.