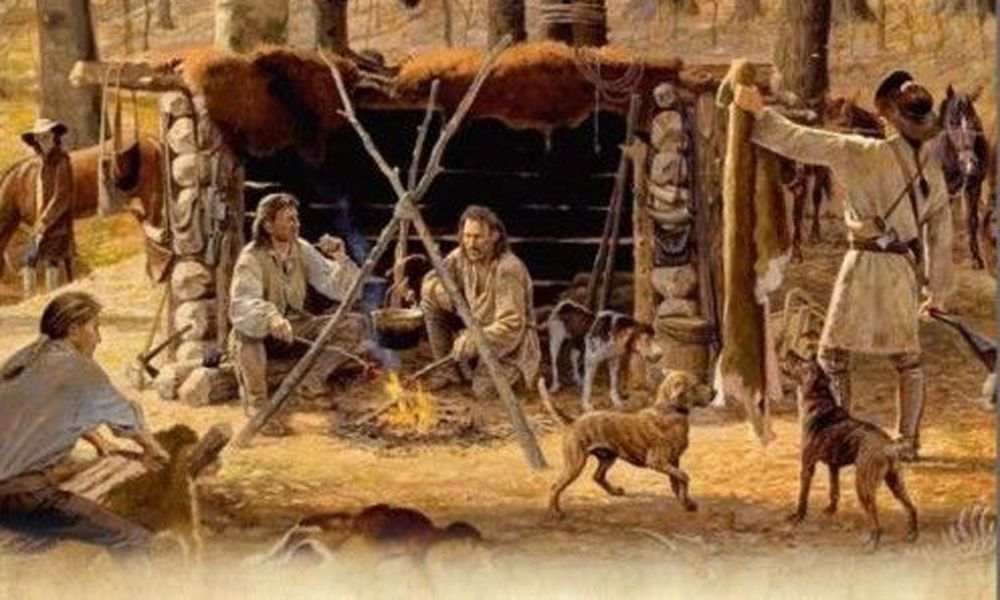 Once there was a mountain man
who couldn’t write his name,
Yet he deserves the front row seat
in History’s Hall of Fame,
He forgot more about the Indians
than we will ever know,
He spoke the language of the Sioux
the Black Foot and the Crow,

Let’s drink to old Jim Bridger
yes lift your glasses high,
As long as there’s the USA
don’t let his memory die.
That he was making history
never once occurred to him
But, I doubt if we’d been here
if it weren’t for men like Jim.

There’s poems and there’s legends
that tell of Carson’s fame
Yet compared to Jim Bridger
Kit was civilized and tame
These words are straight from Carson’s lips
if you trust a man like him
”If there’s a man who knows
this God forsaken land it’s Jim.”

Let’s drink to old Jim Bridger,
lift your glasses high,
As long as there’s the USA
don’t let his memory die,
That he was making history
never once occurred to him.
But I doubt if we’d been here
if it weren’t for men like Jim.

Most would agree, Jim Bridger was the greatest mountain man of them all. At the age of nineteen he answered the call of William Ashley “to all enterprising young men,” and joined the storied Ashley-Henry expedition that journeyed up the Missouri River in 1822 and opened the fur trade that created the unique breed, the American mountain men.

Although he was known as a great Indian fighter he always tried to get along and live peacefully with the tribes. He had three Indian wives, two Shoshone and one Flathead (Salish) but they all died young leaving Jim with several children to raise. He died in 1881 at the ripe old age of seventy-seven.

Although he was illiterate Jim spoke French, Spanish and several Indian tongues.

He was a mountain man, explorer, trader, part owner of a fur company and in 1843 with the decline of the fur trade he built a fort on the Oregon Trail and sold supplies to the immigrants passing through. His business flourished for ten years until a band of Mormon vigilantes destroyed his fort. He gathered up his half-Indian family and moved to Missouri before hiring out as a guide. He hired out as a scout for the Army and mediated between the Indians and the whites who were encroaching on their lands in increasing numbers.

But this was the golden age of prevarication and Jim or as his friends called him “Old Gabe,” was the consummate yarnspinner to the greenhorn immigrants. Since he was a legend in his own life many of the tall tales of others were attributed to him. He would have liked that. One his favorites told while sitting around the campfire with a eager-eyed greenhorns was the time he was being pursued by a hundred or so Cheyenne warriors. They chased him for some distances and Jim wound up cornered in a box canyon with no way to escape. As the Indians were closing in old Jim would suddenly pause. After a few moments one of his listeners would ask, “What happened then, Mr. Bridger?”

He give them a sly grin and reply, “They killed me.”

He was among the first white men to see the geysers and other natural wonders in what became known as Yellowstone National Park.

When Jim Bridger told of the boiling rivers in the Yellowstone Parks and geysers where, “Hell bubbled up,” people laughed and called them “Bridger’s Lies.”  Some wondered if trappers had been demented by the mountain air.  Others claimed his listeners exaggerated his already fantastic accounts.

In reality, Easterners who’d never crossed the wide Missouri didn’t believe descriptions of the spectacular scenery were real, even though they were.  Mountains reaching heights of over 14,000 feet were beyond the belief of folks who’d never seen mountains taller than 4,000 feet.  Since those skeptical Easterners tended not to believe a word they said anyway, the mountain men felt compelled to exaggerate.

Another one of Bridger’s favorite tales was one about a Glass Mountain.  One day he came upon a magnificent elk.  Bridger took careful aim at the unsuspecting animal and fired.  To his great amazement, the elk was not wounded and seemed not even to have heard the report of the rifle.  Bridger drew considerably nearer and gave the elk the benefit of his most deliberate arm, but with the same result as before.  A third and fourth try produced the same results.

Utterly exasperated, he seized his rifle by the barrel and resolved to use it as a club since it had failed as a firearm.

He rushed madly toward the elk but suddenly crashed into an immovable vertical wall, which proved to be a mountain of perfectly transparent glass, on the further side of which, the elk, in peaceful security, was quietly grazing.

Stranger still, according to Bridger, the mountain was not only of pure glass but was a perfect telescopic lens, and whereas the elk seemed but a few hundred yards off, was in reality, twenty-five miles away.

When an inquisitive pilgrim asked him if there was anything  remarkable in the area, Bridger told him of a crystal mountain so clear that even the most powerful telescope couldn’t see it. When the pilgrim asked how large it was, Bridger replied it was three miles in circumference at the base but its height was unknown.  The only way they knew it was there is the carcasses of birds that flew into it and killed themselves in the collision.

Bridger told of a favorite camping ground where there arose a bald, flat face of a mountain, but so distant that the echo form any sound that originated in camp did not return for six hours.  Upon retiring for the night he would call out lustily, “Time to get up,” and true to his calculation the alarm would roll back just at the precise time it was ready to get up.

He also knew of a lake in the Yellowstone country that was fed by boiling water that floated in a stratum of three or four feet thick over the cold water below.  He’d drop a line down into the cold water, hook a trout and pull him up to the hot, cooking the victim.  By the time he reeled it in, the fish was ready to eat.

Bridger claimed a great medicine man of the Crow once put a curse on a mountain causing everything to become petrified.  All forms of life, bear, elk, eagles were suddenly transformed into stone. Even the moon and sun shown with petrified light.

While riding through he came to a great wide canyon that appeared to cut him off from where he was going.  Then he got an idea.  He drove his horse to the edge and said, “Git up.” The horse turned to see if he was joking, because they were old friends, and when he saw Bridger was serious, the horse pranced right out across the air in the canyon.

“Not there,” said Bridger. “Even the law of gravity is petrified.”

“Do you have additional proof?” asked the skeptical tourist.

“Yessir, sometime later that horse got together with three or four other ponies on the edge of Wildcat Bluff, to watch him perform the stunt.  He pranced over the edge and I never saw a horse look as surprised as that pony did as he started to fall.  He was a good, logical horse.  Only thing he didn’t know was that in most places the law of gravity isn’t petrified.”