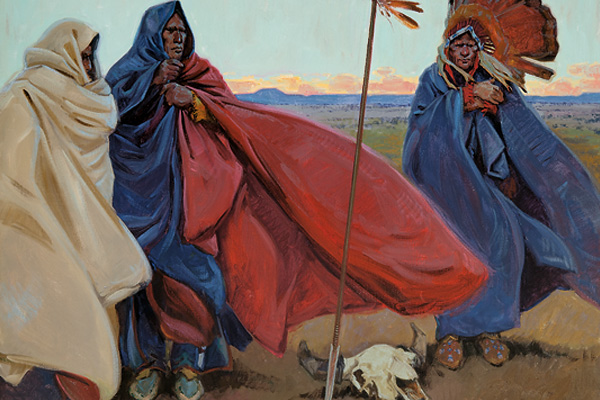 “I always did it,” he says. “It especially helped having my father as an artist. I always had access to materials, sketchbooks and whatever else I wanted, he’d let me use in the studio.”

Since those early days of running home to see what his Cowboy Artists of America father was working on in his studio, Moyers had the opportunity to study with the award-winning Western artist Robert Lougheed.

After that, Moyers’s paintings started selling, and he stuck with it, whether he was depicting sweeping landscapes or American Indians.

“I’ve always been interested in Western history,” he admits. “I’m just painting Western subject matter because it’s what I know and it’s what I grew up with.”

Having lived in the Albuquerque-Santa Fe area of New Mexico pretty much his entire life, Moyers especially enjoys painting the region’s Pueblo Indians. Another favorite subject matter of his is Mexico’s Old West history from 1860-1920.

To prepare for a painting of the Mexican Revolution or of a storied Indian battle, he reads books that cover that history and goes antique shopping with his wife for period Mexican or Indian outfits. “Depending on which culture or people I paint, I try to honor them,” he says. “It’s just the way I feel. I’m not going to paint a painting that makes a certain culture or person look bad.”

For as much time as he may have spent with his father William in the studio as a kid, Moyers enjoys spending a majority of his time today in the outdoors, so he can ensure he records the values and color temperatures accurately. “It’s so important that you work from life because no matter how good the camera is, it’s not as important as working from life,” he says.

As an artist, Moyers only looks toward the future, sometimes even forgetting the work he’s done in the past. He may not recall the year he first began painting, but he knows what he’ll be doing for many years down the road. “I just want to keep painting,” he says. “In the whole scheme of things, my goal is to continue to work.”

“You just hope you touch somebody’s emotions with your work,” the artist adds, “and if you do that, then you’re successful.”