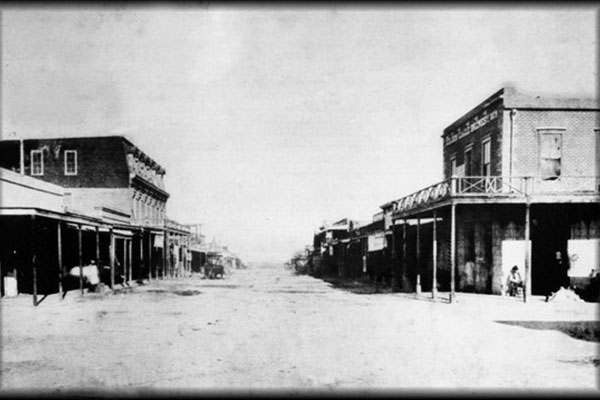 Tombstone’s Allen Street is one of the most famous in the Old West. On the north side saloons were open 24 hours a day. It’s typical of Arizona’s curious anomalies that the street was named, not for a famous lawman, outlaw or gunfighter but for a man who made a fortune selling pies.

John Allen came to Arizona during the 1858 gold rush at Gila City, a few miles east of Yuma. That same year he moved on to Tucson where he gave up gold prospecting and began selling dried apple pies for a buck a piece. He made so much money selling pies he was able to open a general store. Soon he had stores in Maricopa Wells and Tubac. During his tenure as Adjutant General for the territory he became “General Pie.”  Always a wandering man, Allen headed for Tombstone following the silver discovery in 1877.  Allen made and lost several fortunes during his 43 years in Arizona.

In 1881 at the age of 63 he married a teenage girl named Lola Tapia. Her mother objected but finally agreed to the marriage if he would allow her to live in a convent. Despite this odd domestic arrangement she gave birth to a daughter a year later.

They divorced in 1891 over a matter of adultery. Lola was fined $25 for committing adultery. The divorce proceedings took 15 minutes. Lola then proceeded to marry her lover a few minutes later.