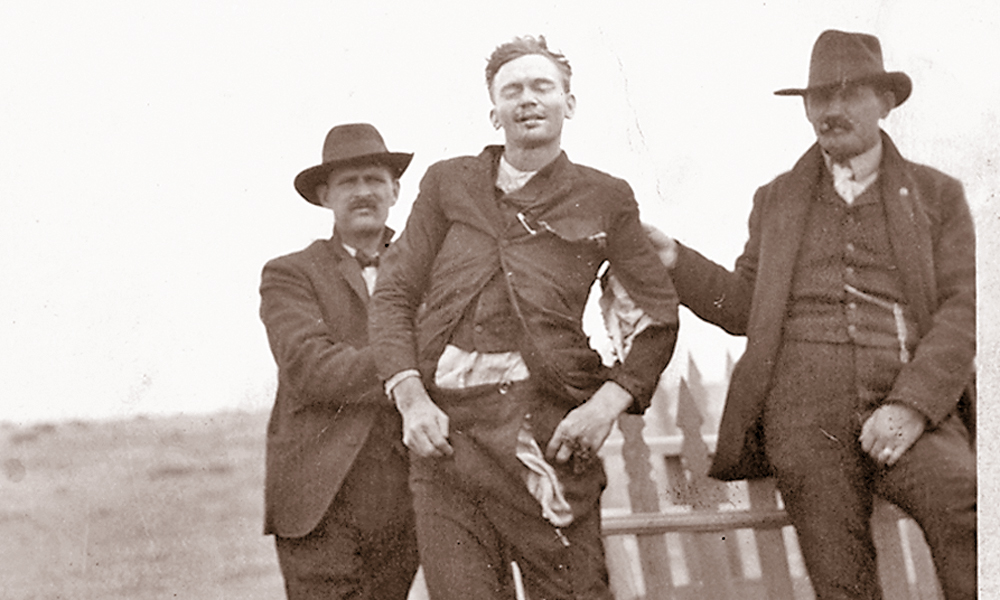 On the evening of Saturday, April 8th, 1905, two cowboys, John Shaw and Bill Smythe walked into the Wigwam Saloon in Winslow, bellied up to the bar and ordered a couple of drinks. They noticed a dice game going on and a few hundred dollars on the table. They pulled their guns took the money and ran towards the train yards leaving a trail of silver dollars.

The two badboys jumped a train bound for Flagstaff but a posse caught up with them at Canyon Diablo. Smythe was captured but Shaw resisted, was killed and buried on the spot. The following evening the cowboys at the Wigwam were discussing the fact that Shaw didn’t get a chance to finish his drink. “He shouldn’t have to go to his grave thirsty,” one said.

So about fifteen of them headed for Canyon Diablo accompanied by bottle of whiskey and a Kodak box camera where they proceeded to dig up Mr. Shaw. He was actually wearing a mischievous-looking death grin when they propped him up, gave him a drink, and took his photo. However the event seemed to have a sobering (no pun intended) on the boys.

Shaw was then lowered back in his wooden box. A man named Young Marley sang a couple verses of “Bringing in the Sheaves,” and recited a childhood prayer. The unfinished whiskey bottle was tossed into the coffin and the outlaw was re-buried.

The boys hopped on the next eastbound train and rode back to Winslow.