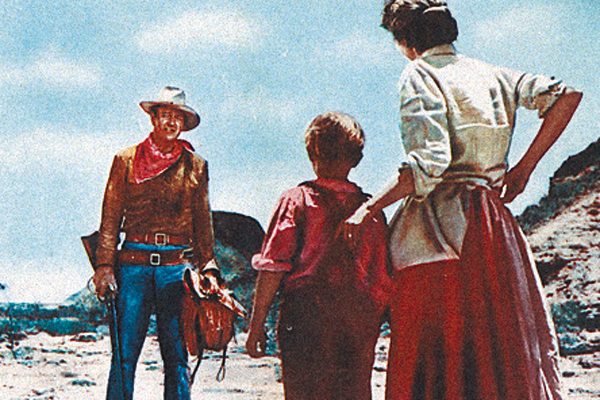 Stagecoach (1939)—John Wayne plays the Ringo Kid, who escapes from prison to pursue the Plummers for murdering his father and brother. The Kid helps a stagecoach full of misfits through dangerous Indian country.

The camera moves in on the Ringo Kid. He is cocking his Winchester in his right hand and holding his saddle gear in the other. The film goes out of focus for a frame or two, then comes in tight on the Kid. This is the moment the Duke is born.

Angel and the Bad Man (1947)—Exhausted gun-fighter Quirt Evans (Wayne), on the run from an even badder man, finds a safe haven with a Quaker family.

This was the first movie John Wayne produced. It was written and directed by his favorite screenwriter, James Edward Grant. Critics liked the film, but fans thought it lacked action. Wayne was rumored to have had an affair with the young female lead, Gail Russell, but denied it. The troubled actress made one more film with the Duke (Wake of the Red Witch, 1949).

If Stagecoach made John Wayne a star, this movie established him as an actor. The screenplay by Borden Chase and Charles Schnee is really Mutiny On The Bounty on horseback. Critics were surprised at the depth of Wayne’s characterization. “I never knew the big son-of-a-bitch could act,” John Ford told the film’s director, Howard Hawks.

She Wore A Yellow Ribbon (1949)—Wayne plays Captain Nathan Brittles, a cavalry officer about to retire, who’s unwilling to walk out on his comrades during an Indian war.

The second of John Ford’s cavalry trilogy, preceded by Fort Apache and followed by Rio Grande. Director Ford tried to capture Frederick Remington’s West by using some of the painter’s colors and compositions. Monument Valley was so superbly highlighted in color, it won cinematographer Winton C. Hoch an Oscar. Of all the Westerns he made, the Duke was most proud of his role as Captain Brittles.

Hondo (1953)—Hondo (Wayne) aids the lonely wife (Geraldine Page) of a missing rancher in the middle of an Apache uprising.

The movie is based on a Louis L’Amour short story (later expanded to a novel) and is a first film for Geraldine Page, who was nominated for an Oscar to Wayne’s amazement: “She may have been great on Broadway, but she didn’t know a damned thing about making movies!” Although the movie did well at U.S. and European box offices, and grossed enormously in Japan, it was overshadowed by Shane.

The Searchers (1956)—Wayne plays Ethan Edwards, who sets off on a seven-year search for his niece who was kidnapped by Comanches.

“Of all the John Ford pictures I worked on,” wrote Harry Carey, Jr. in his autobiography, Company of Heroes, “the set of The Searchers was unlike any other. Uncle Jack [Ford] was much more serious, and that was the tone that pervaded the cast and crew.” Wayne wasn’t  relaxed in playing the crazed racist, Ethan Edwards. “When I looked up at him in rehearsal,” Carey said, “it was into the meanest, coldest eyes I had ever seen.”

Rio Bravo (1959)—With the “help” of his misfit friends, Sheriff John T. Chance (Wayne) tries to keep a killer from breaking out of jail.

Bad-mouthed by critics when it was released, this Western became an American classic. The British Film Institute poll ranked it as one of the best films ever made—period. Director Hawks switched around the roles for his 1967 remake, El Dorado, making the sheriff a drunk (instead of his deputy) and giving him a young deputy who can’t shoot.

The Alamo (1960)—Tough frontiersmen defend liberty and property values from a ruthless foe.

To do this film, Wayne mortgaged his house, New York apartment, production company and even his automobiles. He begged money from Texas tycoons to build an Alamo replica on a Bracketville ranch at a cost of $1.5 million. The film’s budget eventually reached $12 million—more than any other film up to that time. Talk about bettin’ the ranch! The moneymen forced Wayne to play Davy Crockett, although he was too old to wear a coonskin cap. Wayne smoked up to three packs a day and lost 30 pounds during the filming. “He wasn’t making a movie,” his wife Pilar said, “he was on a crusade!” John had to sell his share of the picture and work another movie for free to pay United Artists for the overages. Though the film eventually turned a substantial profit, the Duke didn’t make a red cent.

Wayne used profanity for the first time in any of his movies. When the killer (Robert Duvall) yells, “I call that bold talk for a one-eyed fat man!” and the Duke yells back, “Fill your hand you son-of-a-bitch,” you know the bad guy’s just made a baaaad misjudgment. Wayne’s rousing shoot-out on horseback, with a pistol in one hand, a rifle in the other and the reins in his teeth, is his best ever.

The Shootist (1976)—Based on Glendon Swar-thout’s Spur-winning, best-selling novel, the movie pits an aging, cancer-wracked gunfighter (Wayne) against revenge-minded villains.

The final shoot-out’s a beaut, staged by veteran action director Don Siegel. You bet this is the way the greatest Western film hero of all time wanted to go out on screen, with his six-gun blazing and his boots still on. No American movie star ever made a better valedictory film.

Miles Hood Swarthout wrote the screenplay for The Shootist. His first Western novel, The Sergeant’s Lady, was recently published by Forge Books.