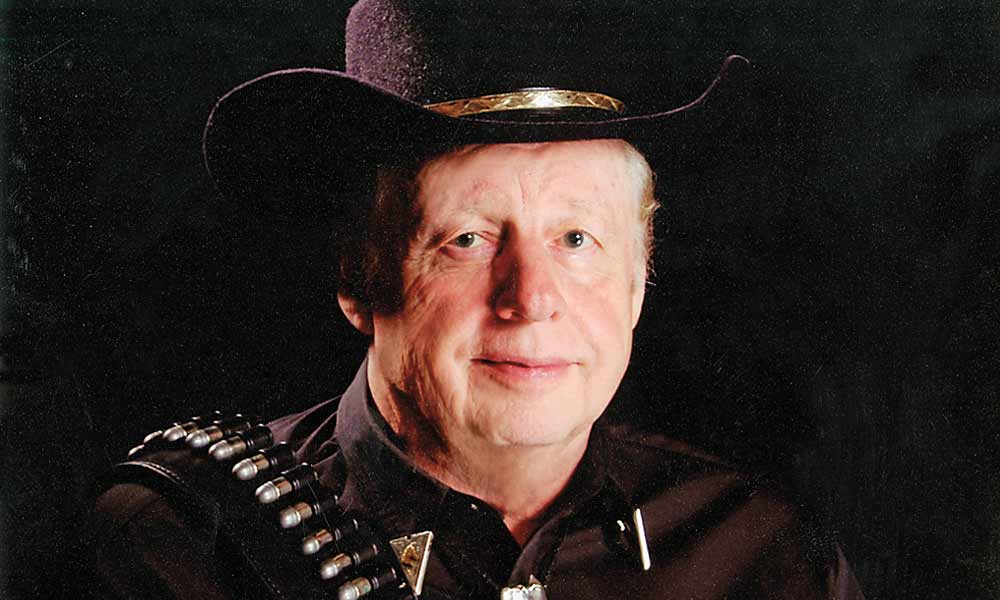 I saw my first Gene Autry movie, Guns and Guitars, on my fifth birthday. I was hooked, and I knew right then I wanted to be a singing cowboy like Gene.

When I saw Gene Autry in the movies, I never dreamed that 17 years later, he would put me under contract and take me all over America and Canada until he retired in 1957.

My love of Western history began in my adopted hometown Northfield, Minnesota, with the legendary James-Younger Gang’s failed Northfield raid in 1876.

The first song I sang on the radio was “Ghost Riders in the Sky,” on KDHL in Faribault, Minnesota, in 1949.

My first celebrity interview on my radio show was Rex Allen Sr., who had just signed with Republic Pictures. He became my musical mentor for the next 50 years, and I ended up doing the eulogy at his memorial in Willcox, Arizona, in 2000.

Rex Allen Sr. taught me a lot about show business through the years. Two pointers he gave me early on I never forgot: “Keep your guitar in tune, and sing on key!”

My first break on TV was in 1953, when the ABC affiliate KMMT in Austin, Minnesota, offered me a six-day-a-week TV show that I did for two years.

My big break in L.A. was when Dick Jones asked me to sing at a private party. Two weeks later, Dick called me and told me that Gene Autry wanted to see me about replacing Johnny Bond on his shows. Bond had been with him for 17 years and did not want to travel anymore. Gene put me under contract, and I stayed with him until he retired at the end of 1957.

I got the idea for the song “The Ballad of Paladin” while I was on location filming an episode of Have Gun–Will Travel. The day after we finished the film, my daughter Leslie was born, March 14, 1958. I picked up my guitar and wrote the song in 20 minutes. Later that afternoon, I went to a studio in Hollywood and made three copies of it, and gave one to Richard Boone, the star of the show, and one to Sam Rolfe, the co-creator of the series. I gave it to them as a musical thank you for having me on the show. Without my knowledge, over the weekend, they played the song for the top brass at CBS. The following week, I had a contract as the singer and writer of the song for TV.

When I contracted my song, Mitch Miller signed me over the phone from New York City to a Columbia Records contract.

My career with Johnny Cash started soon after I signed with Columbia. Cash had moved to Hollywood from Memphis. In November of 1958, he asked me to play three dates with him in California. Thirty-nine years and 11 months later, we played our last one when he retired for health reasons.

My favorite Western song is Stan Jones’ “Ghost Riders in the Sky.” I never would have written “Paladin” without him.

My favorite Western movie is The Searchers. Stan Jones wrote the song for that movie, and I later recorded it for Columbia Records with the Sons of the Pioneers.

My dad’s motto for success was: Always be true to yourself, and do what you love to do. He could have left teaching and coaching for a lot more money, but wouldn’t do it.

I feel like the luckiest guy in the world to have had my boyhood dreams come true.

Johnny Western, Musician
Since 1946, when Johnny Western received his first guitar, he has entertained millions as a singer, songwriter and disc jockey. Known best for his song “The Ballad of Paladin,” from the television show Have Gun–Will Travel, Western has recorded seven albums and played guitar on 71 Johnny Cash singles and five Cash albums. Western was recently inducted—his 13th such honor—into the Arizona Music & Entertainment Hall of Fame. The retired singer lives with his wife, Jo, in Mesa, Arizona.