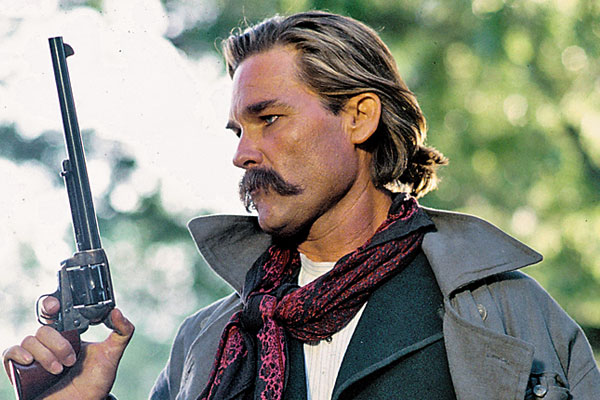 We’ve selected some of our favorite quotations from our groundbreaking interview with Kurt Russell. To read the entire feature, visit TWMag.com and search for: “The Western Godfather.” Smartphone users can scan the QR code at the bottom of this page for instant access.

On the Ghost Director:

I said to George [Cosmatos], “I’m going to give you a shot list every night, and that’s what’s going to be.” I’d go to George’s room, give him the shot list for the next day, that was the deal. “George I don’t want any arguments. This is what it is. This is what the job is.”…I got him from Sly Stallone—called up Sly, said I need a guy. Sly did the same thing with Rambo 2 with George. And I said to George, “While you’re alive George, I won’t say a goddamn thing.” [Cosmatos died April 19, 2005.]

I didn’t get a chance to edit the movie, which I thought was unfortunate because it could have been one of the greatest Westerns ever, ever, ever made. And it’s pretty damn good. We had a great cast. A phenomenal script.

On the Original Script:

There’s a lot of great stuff in Tombstone. Great actors who were in a very difficult situation, who I bought their trust by cutting myself out of the movie—as an actor. There’s stuff in that original script that if you were ever to read it you’d go, “Oh ho ho.”

We needed to lose 20 pages. Kevin would never lose the 20 pages. He would never lose it. So once he was gone, there’s only one way I’m going to get the trust of these actors and that is to cut myself out of this goddamn movie and make some changes; make Wyatt an “aura” character.

In other words, you meet him, you see him, you know who he is. When you see him step off the train, that’s it. There’s the guy. And then Doc Holliday fleshes him out. I said, “You’re going to have all the acting stuff to do in this movie, and I’m going to make sure it gets done.” And I saved most of everybody else’s stuff to do. Because, in fact, I could do that with Wyatt—I knew the script extremely well—and I could do that with Wyatt because I was going to play him.

I was very disappointed with Kevin. I told Kevin he was going to get fired. I said, “It’s not working, and they’re going to come in here and can you,” and they did. It was a bad experience in that regard, but it was a great—Tombstone mattered. [The drama] doesn’t matter—all movies have their life. Some are easy, and some are not (laughs).

On the Unseen Tombstone:

The shame about Tombstone, that you can’t possibly appreciate, although Andy Vajna did give me the tape of everything on the movie, to, whenever I wanted to, to reconstruct the movie. The movie, what you saw, okay, is that movie. The movie is The Godfather—a Western Godfather. That’s how different that movie is from the one you saw…. all that stuff is put away in my garage, including an interesting scene that shows a deeper relationship between Wyatt Earp and the Cowboys. Who knows?—maybe sometime….”