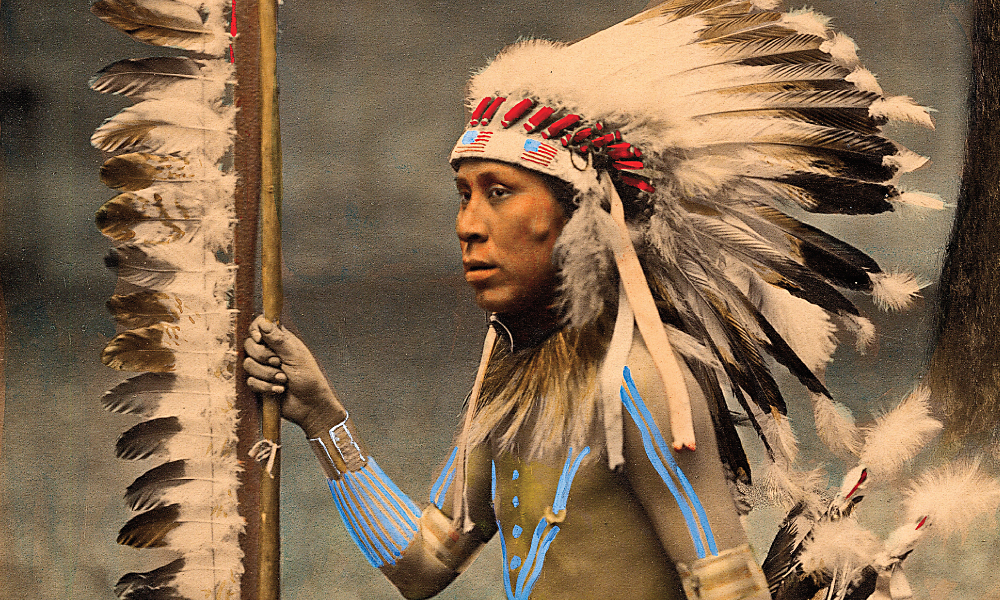 Sam Lone Bear was the Beau Brummell of his time and a savant. At least that was what the newspapers reported in 1899, and they were correct. He was a snappy dresser, whether in Lakota or contemporary American clothing, and an articulate spokesperson for his people, one who conversed in English, French and German. Lone Bear successfully existed within both Lakota culture and white culture. As a performer, he helped bridge the gap between them, representing the Lakota to the United States and Europe.

Born in 1878, Sam Lone Bear never knew life before the reservation and was introduced to the outside world in the Indian schools. He neither resisted that outside world nor was assimilated by it. By performing, he was able to maintain his culture’s traditions at a time when the United States government was trying to eradicate them. He also saw more of the world than most people of his day.

Lone Bear reminisced later in life that school was where his curiosity about the rest of the world was aroused. Teachers told him about the cities and marvels of civilization. He decided he wanted to see them firsthand. When William “Buffalo Bill” Cody visited the Pine Ridge Reservation in South Dakota, Lone Bear listened to the stories of his travels and concluded Cody’s Wild West show would be his ticket to the world. He joined Buffalo Bill’s Wild West in 1894, at age 16.

Lone Bear became a featured performer in the Wild West, taking part in re-
created battles and frequently posing for photographs. His ability with languages, and with people, enabled him to fill the roles of interpreter and chief of the Indian police for Cody’s show. He even became an actor, assuming the role of Chief Big Foot at Wounded Knee in Buffalo Bill’s 1914 movie about the Indian Wars. After the demise of Buffalo Bill’s Wild West, Lone Bear appeared with other Wild West shows as well as in the 1923 movie The Covered Wagon.

Lone Bear has often been confused with his cousin of the same age and name. That Sam Lone Bear, who served time for both horse theft and human trafficking, has been credited by anthropologists as an important leader in the peyotist movement. Lone Bear the performer, when not traveling in shows, was a model citizen, serving intermittently as interpreter and policeman on the Pine Ridge Reservation.

Lone Bear performed in Wild West shows from 1894 to 1935. In addition to traveling throughout the United States, he toured Europe eight times. Those European trips included visiting sites like the Eiffel Tower in Paris, France, and the catacombs of Rome, as well as performing in nearly every country on the continent.

On his last trip to Europe, in 1935, he performed at the Exposition Universelle in Brussels, Belgium. At 57 years of age, he had performed longer with Wild West shows than any other Lakota and had served as an unofficial ambassador to the world for his people.

Steve Friesen is the director of the Buffalo Bill Museum and Grave in Golden, Colorado. Research for this article informed, “From Prairie to Palace: Buffalo Bill in Europe,” on exhibit until January 20, 2017.