Carrying his 200-pound body down the hill would have slowed their own frantic escape from the volcano.

The three had crested Lassen Peak’s Cinder Cone rim when, without warning, a column of blue-black smoke shot up. A sky full of ash, dust and rock rained down. A rock about twice the size of a man’s fist struck Graham in the chest, knocking him unconscious.

Unconscious, but not dead.

When Graham awoke, he reached for his chest wound, but his right arm would not let him touch it—he had broken ribs, a broken collarbone, maybe more. The volcanic plume above him was massive, visible even in San Francisco, more than 200 miles away. Graham called out to Phelps and Tipple, but they were long gone, running, sliding and tumbling their way to survival.

Born in neighboring Tehama County in 1884, Graham had claimed his homestead in the Shasta County village of Viola in 1911 and worked as a lumberman while proving up his claim. He knew the risk of hiking to the rim: the newspapers made a big deal of the eruptions, even publishing retrospectives on the Lost City of Pompeii.

After close to 200 years of quiescence, Lassen Peak had rumbled to life two weeks earlier, on May 30, 1914. The curious began hiking up to Cinder Cone rim. Graham had not been able to resist the chance. 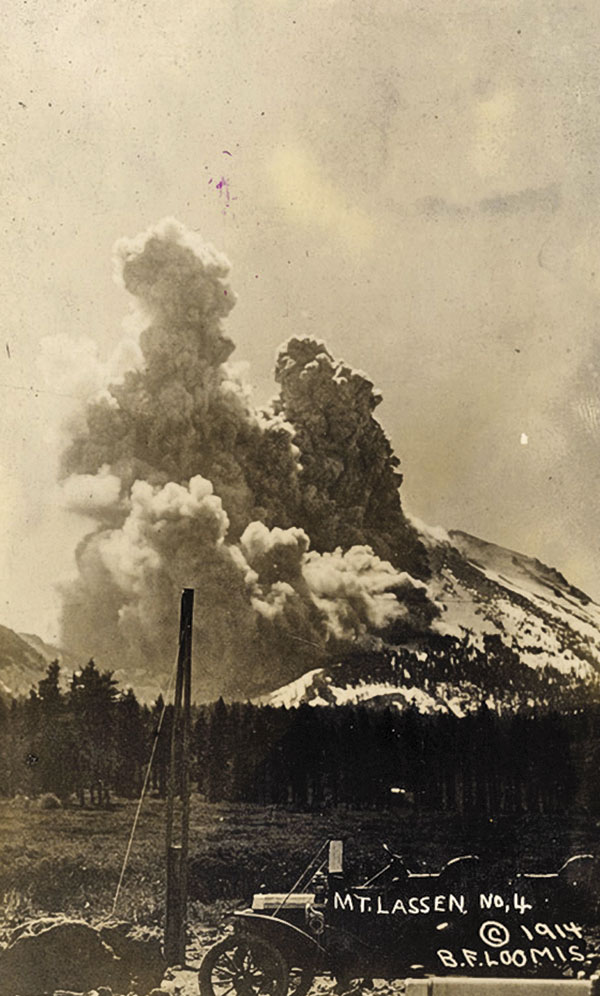 Once the rain of rocks subsided, Phelps and Tipple made their way back up the mountain with several other men to recover Graham’s body. They were stunned to find him alive, writhing in pain and cursing, blood wicking into the snow around him.

Using a blanket as a makeshift stretcher, the men transported Graham down the mountain and to a doctor in Viola by about midnight. A surgeon removed a piece of his shoulder blade and sutured the gash on his chest, but was not optimistic about Graham’s chance of survival, as he told the Sacramento Union newspaper: “…Lance Graham is still alive, but so seriously injured he is expected to die within a few hours.”

The Los Angeles Herald, more concerned with getting the scoop, reported that Graham had died.

Yet Graham pulled through. When he regained consciousness, he told reporters his story: “Just as I turned to leave the crater’s rim, there was a puff of blue smoke, followed by a tongue of red flame that resembled the discharge of an old fashioned cannon…. I started to pick my way down the mountain, but in a trice I was enveloped in a cloud of smoke, while a perfect hail of small volcanic bombs and cinders beat down upon me.”

He later claimed, “I wasn’t scared a bit,” but admitted, “I’ll never climb that peak again.”

The next year, in April 1915, Tehama County civic leaders trotted Graham out to the Panama-Pacific International Exposition in Francisco, saying: “He will be the only man there that was ever hit by an active Madein-America volcano and will be a feature that no state in the union can steal from us.”

Tragically, the state of Washington did steal that “feature” from California, in 1980, when the eruption of Mount St. Helens killed more than 50 people.

Graham lived out his days as a wounded homesteader in Tehama County until he died quietly in 1955.