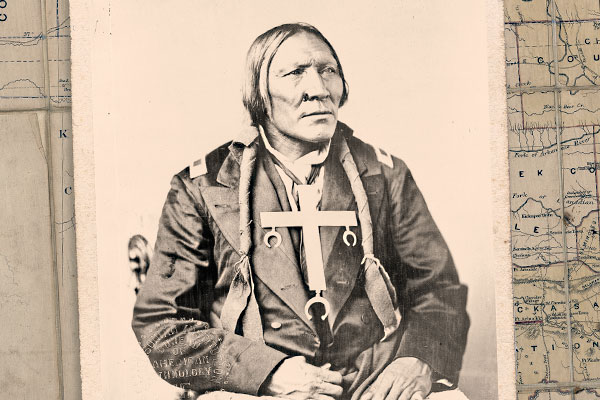 Born in 1828 to the Southern Cheyenne tribe, Tak-kee-o-mah, or Little Robe, was raised a warrior, his skills honed in combat with traditional enemies, the Ute and the  Pawnee tribes.

In his twenties, Little Robe survived a battle with the Pawnees on the Beaver River of Kansas where many of their braves and Chief Alights-on-a-Cloud were killed.

But the seminal event in Little Robe’s life, after becoming a chief in 1863, was the Sand Creek Massacre of November 29, 1864.

Cheyenne elders crafted a peace offer to the U.S. military, conveyed by Black Kettle, and then turned in their arms at Ft. Lyon, believing the government was seeking peace. The Cheyenne also accepted the government’s suggestion to camp at Sand Creek as Colorado Territorial Governor John Evans reviewed their offer.

The government did not talk peace.  The whites’ response to the weaponless tribe was a dawn attack on the isolated reservation by the 1st and 3rd Colorado Cavalry and a company of First New Mexico Volunteers led by Col. John Chivington.  The Cheyenne camp displayed an American flag and Chief Black Kettle met the troops with a white flag of peace. But the soldiers followed specific orders to “kill and scalp all, big and little; nits makes lice.”

The ambush was brutal, chasing and slaughtering around 200 Cheyenne and Arapaho, most of whom were unarmed women and children. The women were raped; their corpses mutilated. Indian body parts were paraded through the streets of Denver, where Col. Chivington appeared on stage entertaining audiences with embellished stories of the culling, while displaying 100 Indian scalps.

Word of the atrocity reached Congress.  Members expressed outrage, offered an investigation, and in the end, failed to take any punitive action, other than delaying Colorado’s entrance into the Union for ten years.

After Black Kettle’s death during the Battle of Washita in 1868, Little Robe concluded that warfare with whites was fruitless and he became the principal chief of the peace faction.

Little Robe visited the East, meeting with President Ulysses S. Grant and Congressional leaders. The searing memories and lessons of battles like Sand Creek convinced him Indian survival was impossible without appeasement  to the U.S.

Chief Little Robe lived in Indian Territory on the North Canadian River until his death in 1886. He worked for peaceful joint existence, protecting the Cheyenne culture, and refusing federal orders to take  Indian children from their parents to off-reservation schools.