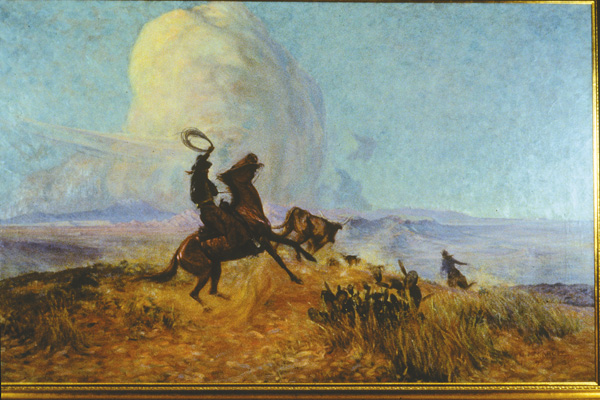 Lon Megargee (1883-1960), Arizona’s best known cowboy artist, seemingly lived a life that could have tumbled out of the pages of the dime novels he was so fond of as a boy.

A cowboy, rancher, gambler, friend of lawmen, city fathers and varmints, romancer of women and acknowledged artist, Megargee was said to have experienced larger-than-life adventures akin to those of cowboy heroes thundering across movie screens. While Megargee was touted as “Arizona’s Picasso” and the “Southwest’s Toulouse-Lautrec,” the artist’s greatest creative achievement may have been the character he invented. Swaggering about in a dashing charro outfit, cheroot firmly planted between his lips and partially shadowed by an enormous cowboy hat, Megargee gave new meaning to the terms “re-invention,” “self-promotion,” and “bullshit artist,” and he followed in the fine old Western tradition of the tall tale, especially when his audience was comprised of gullible tenderfoots!

On view at Wickenburg’s Desert Caballeros Western Museum, the retrospective show titled “The Cowboy’s Dream: The Mythic Life and Art of Lon Megargee” documents some of the artist’s firsthand experiences. These works focus on cattle herds, galloping horses, majestic landscapes, cowboys and Indians as well as imagination-driven tales of adventure celebrating outlaws such as Black Bart. Written especially for the show, an accompanying biography excels at the dauntless task of separating fact from fiction regarding the following stories perpetrated by Megargee.

Megargee was born and raised in Tombstone. Horse feathers! Megargee first saw the light of day in Philadelphia on February 9, 1883, and until many years later, was a Westerner only in his imagination. His father’s  messy divorce and declining economic fortunes probably drove the youngster to re-invent his life. A difficult boy, who disliked the structure and restraints of formal schooling, Lon played hooky until he was expelled.  Inspired by Western dime novels and Buffalo Bill’s performance troop, the 13-year-old hopped a train to Phoenix in 1896.

Megargee was a real rootin’ tootin’ cowboy and owned his own ranch. Regarding the first part of this claim, Megargee told the truth. Unafraid of getting his hands dirty, the teenage wanna-be cowboy found work as a cowpuncher and bronc buster at Bull Ranch, one of Wickenburg’s first dude ranches. Returning to Phoenix, he signed on as an exhibition roper at Arizona Charlie’s Wild West Show, a local version of Buffalo Bill’s extravaganza. Later, Megargee went to work for Billy Cook on the T.T. Ranch near New River, and often rode the range, carrying a gun in case the bad blood between cattle ranchers and sheep owners flared up.

Wanting his own spread, Megargee formed a partnership with Tom Cavness around 1906, and together they ran “El Rancho Cinco Uno.” Although Megargee never owned the spread that Cavness held title to, he was responsible for much of the day-to-day running of the ranch. In 1909, a devastating three-year drought ended his ranching aspirations. Later, Megargee said this disaster was the luckiest thing that ever happened to him. “If I had prospered as a rancher, chances are I’d still be doing it and never put paint to canvas.”

Following his stint as a ranch manager, Megargee was captured and held for ransom by Pancho Villa’s troops in Mexico. Colorful, ex-citing and inexpensive, Old Mexico was a popular destination for American artists. Beginning in 1913, Megargee made several trips to Mexico, which inspired a number of paintings and prints. Arizona’s Governor Hunt smoothed the way for the artist by writing a letter of introduction to General Venustiano Carranza, a man of influence who became president of the revolution-torn nation. Returning to Mexico in 1914, Megargee was captured—if newspaper reports are to believed. Later claims that he was held for ransom by Pancho Villa’s troops and that he drew pictures of the officers to keep in their good graces were probably inspired by Megargee’s uncanny skill at self-promotion.

Women found Megargee’s lean, squint-eyed charm irresistible. Truer words were never spoken. Megargee could have put any of the Hollywood lotharios—Errol Flynn, Warren Beatty, Jack Nicholson—to shame. It is estimated that Megargee had eight wives, and during his lifetime probably romanced 10 times that number of women. (It should be noted that some of his canvasses reflect intimate knowledge of women who couldn’t be called “ladies” by any stretch of the imagination!) A good part of this rogue’s charm lay in his out-rageousness; for example, spotting socialite Mabel Dodge Luhan in Taos, Megargee swept the lady off her feet at a dance while sporting a knife stuck in his boot. To maintain the energy level demanded by his strenuous romancing, the artist was a lifelong devotee of a healthy lifestyle.

Lusty and bold, wielding his paintbrush like a pistol, Megargee cut a wide swathe until the day he died at the age of 77. So what if some of his stories were embellished? Hey, everyone appreciates a tall tale well told.

Editor’s Note: The Desert Caballeros Western Museum is organizing a traveling Megargee print show, titled “Lon Megargee (1883-1960): Prints of the Mythic West,” which will be circulated around the state by the Arizona Commission on the Arts. Consisting of 40 works, the show is curated by ASU art history professor Betsy Fahlman, Ph.D., author of The Cowboy’s Dream: The Mythic Life and Art of Lon Megargee. For more information, call 928-684-2272.