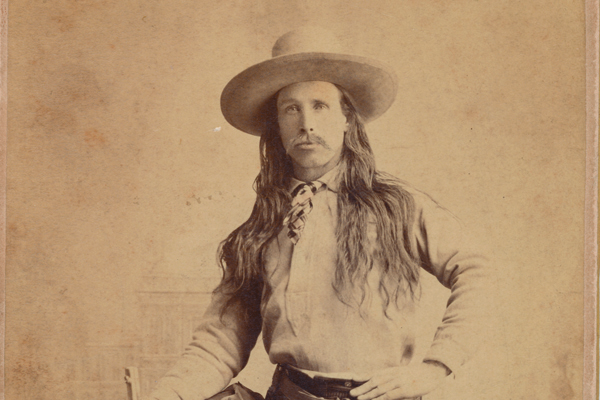 This past June, I attended the Dalton Days Classic Gunfights event in Meade, Kansas, and met two re-enactors from Arkansas.

They told me the head honcho at Fort Smith keeps insisting to volunteers like them that “hippie- style hairdos” were not worn in Judge Parker’s day (the Old West). While it’s true a trend toward shorter hair emerged after the Civil War, there were plenty of exceptions. Just look at the Old West icons featured here.

What seems to drive this modern-day prejudice says more about the 1960s than the 1860s. In the “Swing–ing Sixties,” when the so-called counterculture rebelled against the WWII image of “shave tail” man-hood, hippies reverted (key word) to the long hair and facial hair of their grandfathers. Although the change upset plenty of fathers, long hair wasn’t new by any means.

In classic Westerns, Gene Autry, Hopalong Cassidy, Roy Rogers and John Wayne all had short hair. Only Gabby Hayes or other goofy sidekicks wore their hair long. But the Baby Boomers were aping styles from the real Old West, not the reel version. The photos prove it, and yet, more than a few historians from the WWII generation still cling to the notion that a man with long hair is not authentic and, by extension, somehow effeminate. Let’s see, that would include girly-men such as Kit Carson, Custer, Billy the Kid, Wild Bill Hickok and Long-Haired Jim Courtright, not to mention Sitting Bull, Crazy Horse and Geronimo.

While studying old photos, I notice that hair length evolves to shorter hair (and vice versa), with beards and mustaches styled up, down and around. After the Civil War, it appears young firebrands such as Wyatt Earp and Doc Holliday wore their hair short to upset their Civil War elders. Which, if true, would make it the polar opposite of the WWII aftermath.

The beardless, short-haired look that dominated the 20th century is an anomaly to the rest of history. That some historians cannot see this fact is absurd, making me question their other conclusions and observations.