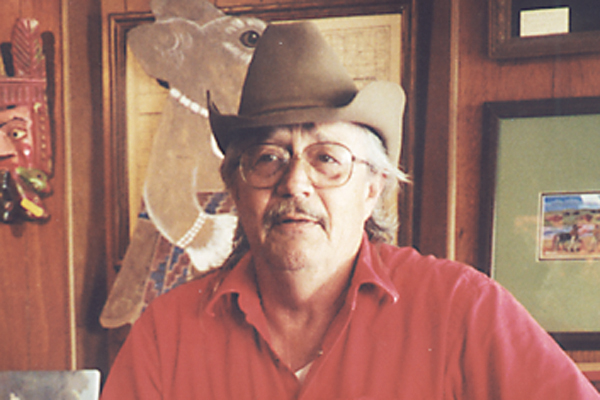 What may be surprising, however, is how far Conley, himself, falls outside any stereotypical mold for a Western writer. “I am afraid of my wife,” says Conley, while entertaining his friends at the annual convention of Western Writers of America.

“A Cherokee woman will take a stick and beat her husband from his head to his heels, and when he can stand it no more, he will roll over and let her beat the other side,” recites Conley, quoting from memory some early European observer of Cherokee culture, to the delight of his listeners.

It’s doubtful that Evelyn Conley, his lovely Cherokee wife of 28 years, has ever actually beaten him with a stick, but there’s no doubt that the Conleys take pride in maintaining traditional Cherokee family values in their home in Tahlequah, Oklahoma, capital of the Cherokee Nation. It’s a delight being around the two of them at the weeklong conference.

It gives a hint of the engaging sort of fresh and captivating characters in Conley’s fiction. His work has won Conley three Western Writers of America Spur Awards, as well as the Cherokee Medal of Honor from the Cherokee Honor Society and induction into the Oklahoma Professional Writers Hall of Fame.

Conley’s Cherokee-viewpoint Westerns—which he invented—have made him a trailblazer in Western fiction. For a long time, editors resisted publishing Westerns with an Indian “good guy” for the main character. When Conley was first trying to break that barrier, one editor told him to try making the Indian a white guy’s sidekick.

Conley complied. He wrote Strange Company, a Civil War yarn set in Indian Territory, about a couple of escaped military prisoners chained together—a Harvard-educated Cherokee and a semi-literate Iowa farm boy named Ben Franklin, who thought he’d been named after a president of the United States. Editors promptly surrendered, and Conley has been winning awards for his Cherokee-viewpoint Westerns ever since.

Even when not writing about Cherokees, Conley has given us such unforgettable characters as Barjack, the marshal of Asininity, a gunslinger who is short on book-learning, short on high-minded morals, short on courage, short on brains, and, at 5’7”  in cowboy hat and cowboy boots, just plain short.

Conley is a master at finding the right words that make his characters unforgettable, such as when Barjack describes the local school teacher as being “from some sissy place like Vermont or something.”

Conley’s talent for fresh humor and vivid images can extend to a “gunfight,” with Barjack hiding on the roof of a building, tossing dynamite at his foes, and reporting, “There was another hellacious roar, and I never seen no more of either one of them two boys.”

One thing we can count on with a Robert J. Conley novel—it will be fresh and entertaining. And when he writes about Cherokees, it will be a great way to learn about Cherokee history and culture, especially from a man who is endearingly nervous about treading lightly in his own Cherokee home—and who may even have been beaten a time or two with that stick.

Oklahoma Choctaw writer D.L. Birchfield’s novel, Field of Honor, will be released by the University of Oklahoma Press in Spring 2004.