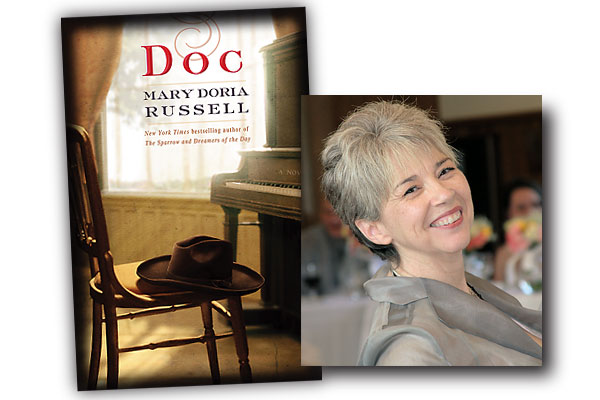 Author of Doc, which Ron Howard will be filming for HBO.

On Ron Howard’s HBO Project:
Here’s a little Hollywood wisdom I’ve learned: it’s not a movie until the cinematographer is on the set eating a breakfast burrito. Or, in religious terms, many are optioned, but few are filmed.

When my first novel (The Sparrow) was optioned by Universal Studios and Antonio Banderas, I actually shopped for a dress to wear to the premier. That was 15 years ago. When the same book was optioned five years later by Warner Brothers and Brad Pitt, I was pleased, but gave the project no better than 500:1 odds.

Now? I am thrilled by the HBO possibility for Doc, but we still get basic cable. I’ll sign up for the channel when the cinematographer finishes that burrito…. I’m putting the odds at 8:5, against. Almost even money, but not a sure thing.

Can you tell I’ve been writing about gambling for the past four years?

On Writing Doc:
My research and reading for Doc were largely confined to the mid-to late 19th-century sources and to contemporary nonfiction. I’m pretty strict about avoiding fiction that overlaps my own work….

That said, I consciously treated the films Wyatt Earp and Tombstone the way Virgil treated Homer’s The Iliad and The Odyssey—he knew his readership would be familiar with those two stories and made The Aeneid compatible with them. Wherever possible, I made Doc congruent with those films, echoing them now and then. Doc itself is partly a consideration of the way movies and myth enveloped and distorted facts.

Why I Have Hope:
I think what’s propelling a new interest in Westerns is a maturing of the genre. In the late 19th and first half of the 20th century, Indians were red savages; cowboys were noble and heroic; pioneers were plucky and brave. After the 1960s, Indians were noble and tragic; cowboys were ignorant brutes; pioneers were colonialist pigs.

What seems to be happening now is that the genre is ready to present individuals instead of broad categories and shallow caricatures. It’s an interesting contrast to the vicious political mood where anything you find personally disagreeable becomes a threat to American survival. We’re willing to look at 19th-century history dispassionately, but we still divide our own world into White Hats and Black Hats.