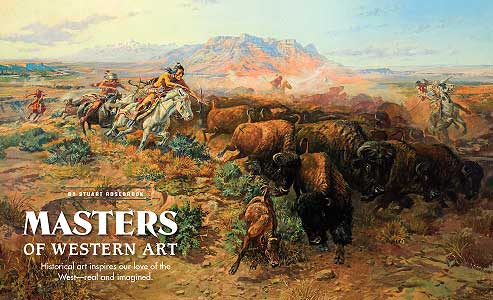 Western historical art has two great masters to whom all later artists are compared: Frederic Remington and Charles M. Russell. The peers have their champions and their detractors, but whether you favor the “Montana Cowboy” over the “New York Dude,”  or vice versa, the fact is these two American artists stand at the foundation of 135 years of Western American art.

Interestingly, both Remington and Russell were from the East, but Russell left New Jersey at age 16 in 1880 never to return, whereas Remington left Yale for Montana at age 20 in 1881, but traveled back-and-forth from the West to New York for his marriage and career.

From the great settlement era and the end of the Indian wars in the West of the 1880s until Remington’s death in 1909, and Russell’s in 1926, the artists’ paintings, sculptures and illustrations captured the soul of the changing frontier. Following in the artistic footsteps of George Catlin, George Caleb Bingham and Alfred Miller, Remington and Russell benefited from traditional exhibitions in salons and galleries, and from the glorious new era of book, magazine and newspaper publishing. Yet, as the two became renowned internationally for their art, the imaginations of a new set of masters—filmmakers—were inspired by the soulful realism of Russell’s and Remington’s art.

In the 1920s, Russell actually spent a great deal of time in Southern California and became a close friend of many Hollywood producers, directors and actors, including John Ford, Will Rogers and Harry Carey Sr., who built the Montana artist an adobe cabin at his Los Angeles-
area ranch.

In 1926, before Russell died, he was famous for saying, “Any man that can make a living doing what he likes is lucky, and I’m that.” He had lived long enough to experience the development of the West from a frontier society of homesteads and range wars to dude ranches and subdivisions. It can only be speculated what Remington would have created as an artist if he had lived longer (he was only 48 when he died of complications from appendicitis), but his legacy can be seen at museums and galleries across the United States, as well as in Western film and television.

Ford, who became a friend of Russell’s through Carey, was greatly inspired by the art of Russell, Remington and Charles Schreyvogel, as were many others in Hollywood. Western artists strongly influenced film directors and their production designers, from the earliest silent horse-operas to the most recent big-budget Western films and television series. In fact, studios and producers have hired hundreds of artists as storyboard illustrators to conceptualize the look of a production. Just watch the films Stagecoach, Red River, Shane, The Searchers, Monte Walsh, El Dorado, Tombstone and, most recently, the television series Hell on Wheels to witness how Western art influenced the production design and costuming. If you tour the Autry National Center in Los Angeles, you will quickly realize the great impact of Remington and Russell on our imagined memory of the West. As you pause at each painting, you will gain an understanding of how the great artists’ palettes and colorful interpretations of the West have influenced generations of Western artists—and artists who interpret words and art onto film. Two films, Monte Walsh and El Dorado, actually used the classic Western art of Remington, Russell and Olaf Wieghorst, respectively, in their opening credits—an homage to the roots of the genre.

In honor of the masters of Western art, Charles Russell and Frederic Remington, who nearly 135 years ago traveled West in search of their destinies, True West celebrates two centuries of Western historical art by featuring a retrospective of works by the two masters and a portfolio of works by artists who also have created and inspired our real and imagined history of the American West.

Click on the image, enjoy our sideshow of the Masters of Western Art.