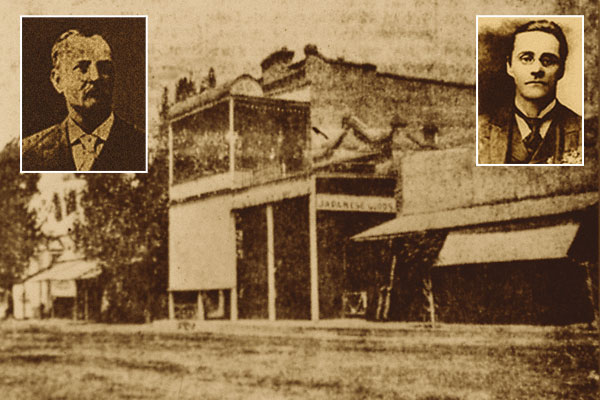 Their target is Jim McKinney, wanted for two murders in Arizona and another in California.

At around 10 a.m., Bakersfield City Marshal Jeff Packard and Kern County Deputy Sheriff Will Tibbet are searching inside the house; they are about to enter the first floor room of Al Hulse, a known associate of McKinney, and his prostitute girlfriend Jennie Fox. The door swings open—directly in front of the officers is McKinney, shotgun leveled at them. Behind him and to his right is Hulse, pointing a rifle. Miss Fox is trying to find cover.

For some reason, McKinney hesitates. Packard fires his rifle at the outlaw but misses. Hulse puts a bullet into Tibbet’s right side. The lawmen back away from the room and move a few steps toward a back door. McKinney unloads one barrel of his shotgun, hitting both officers. Tibbet exits the house and stumbles down the stairs, collapsing in the backyard.

Packard is right behind his injured colleague, but as he attempts to escape he is shot again by both McKinney and Hulse. Badly wounded, the marshal finds some cover behind a privy door in the backyard.

The rest of the posse heads down an alley to the back of the Joss House. As they do so, Hulse and his girl escape through the unguarded front door.

Deputy Marshal Ernest Etter reaches the backyard and fires his pistol at McKinney, who stands in the back doorway. The shots miss. Deputy Sheriff Bert Tibbet—Will’s brother—is also at the scene. He spies McKinney, still partially framed in the door, and opens up with his shotgun, hitting his target in the neck and driving him back into the house. Satisfied with his strike against McKinney, Bert leaves to assist his wounded brother.

Kern County Deputy Gus Tower runs down the alley to help and sees McKinney through the kitchen window. Tower shoots and misses, but his gunfire forces McKinney to move again to the back door.

Bert, still helping his wounded brother, sees the badman in the doorway and fires the second load of shot. McKinney is hit in the left side of the face. The blast pushes him inside the Joss House; his body drapes over the railing to the stairs that lead to the basement hop room.

Jim McKinney, a most violent man, is, appropriately, dead by violence.

The Making of Jim McKinney

By most accounts, Jim McKinney was a good guy—genial, generous and a great employee (cowboy, teamster, miner)—until he hit the age of 24 in 1884.

At that point, the central California resident got involved with gambling, whores and booze—lots and lots of booze. When he drank, McKinney got mean. The tally: at least six shooting scrapes, a knifing, numerous fights, many jail stints and nearly five years in California’s oldest prison San Quentin. And that’s not counting four killings.

The last three murders—in 1902 and 1903—put Jim McKinney on the run, through Arizona and Mexico and back to California.

Haggard and hungry and worn down, he went back to his old stomping grounds of Bakersfield. In mid-April of 1903, he sought refuge with Al Hulse, who he had palled around with for about 18 years. Hulse was a touchy character, an alcoholic and a hophead, who had his own resume of violence.

Jim McKinney went to Hulse’s room in Chinatown to figure out his next move.

Kern County Deputy Will Tibbet was moved to the Southern Hotel, where he died at around 1 p.m..

Bakersfield Marshal Jeff Packard was taken to his home. In spite of several operations, he died of his wounds at five the next morning.

Jim McKinney was buried in the family plot at Porterville, about 50 miles north of Bakersfield. His grave is unmarked.

Al Hulse was picked up a few blocks from the Joss House. He was convicted of second-degree murder in July of 1904 and sentenced to life in prison. Awaiting appeal, he served his time at the Kern County Jail. On October 16, 1906, he cut his own throat with a straight razor.

Kern County Deputy Sheriff Bert Tibbet collected $2,250 in rewards for killing McKinney. He gave the money to his brother’s widow.

Tibbet’s son Lawrence was seven when his father died. He grew up to become one of the most famous baritones singing at the Metropolitan Opera from 1923-50. He was nominated for an Oscar for his role in Laurel and Hardy’s The Rogue Song (1930).

The Joss House stood virtually unchanged until a major earthquake rocked Bakersfield in August 1952. The building sustained major damage and had to be torn down. A bronze plaque commemorating the shoot-out is in the sidewalk where the place once stood.