This year’s American Outlaws turned out to be as big a blunder as the James-Younger gang’s Northfield, Minnesota bank robbery. The film’s wretched reviews and quick box-office demise won’t help Texas Rangers— in the can but on perpetual hold— ever see a theater screen.

From his office in a very un-Western setting—Marco Island, Florida—Miller took time to discuss the movie and the state of the Westerns with True West.

TW: Tell us a little bit about Black Knight Productions.

Merlin Miller: Our company was formed three years ago with the goal of making high-quality but low-cost films. We wanted to do films that had patriotic themes and were reminiscent of the golden era, in the sense of having values and heroes. Jericho was the first project we selected to go into production. It was a high-quality screenplay set in the 1870s in the Southwest. We raised money for it, and did it as an independent feature. We were in production in April and May, and actually brought the film in on budget and on schedule.

Where did you film it?

Most of it was shot in Alamo Village in Brackettville, Texas, where John Wayne built the set for The Alamo. We also shot some scenes at Rancho Rio Grande, just south of Del Rio. That area is where all the principal acting was done, and we shot some second-unit footage, mountain scenes and train scenes, in New Mexico and the southern Colorado border.

Who is in the cast?

Leon Coffee, internationally known as a rodeo clown and a bullfighter, plays a co-starring role. The star is Mark Valley, who has just been cast in Pasadena, a new series on Fox, so we’re hoping that series really takes off. R. Lee Ermey, who has been in a few Westerns and played the sergeant in Full Metal Jacket, plays the marshal. And Buck Taylor, who has been in a lot of Westerns and was in Gunsmoke, plays the trail boss.

It’s a Western, but it’s also a mystery. It’s about this gunfighter who is found nearly dead and is rescued and befriended by a wandering black preacher.

It’s kind of a cross between a Hitchcock movie and a John Ford Western. It’s an interesting mix.

You have already won awards at film festivals. Does that help attract viewers or distributors?

Our whole game plan was to try to secure distribution with a major, or mini-major distributor. But they just don’t want to even look at the film. It’s kind of amazing to me, and we didn’t really understand it, but I suspect it goes back to the fact that it’s a Western and most of Hollywood’s attitude is very much opposed to doing Westerns.

Why does Hollywood turn up its nose at the Western?

For the most part, my contemporaries as filmmakers live in a world of gray. There isn’t clear right over wrong. Because of that, the spirit, the patriotism, the national attitude about conquering the frontier, are not things that interest the Hollywood crowd [this interview was done prior to the World Trade Center bombing]. I came out of the Midwest, and most of my partners tend to have Mid-America values and attitudes. 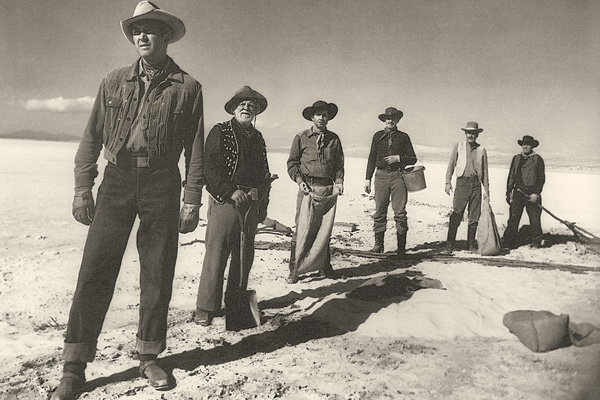 Oh, gosh. I loved Shane, The Searchers; most anything John Ford did I really liked. I was at a screening of The Man from Laramie last year, and remember standing in a long line for a 46-year-old movie that’s not even a classic, and hearing a theater worker say, “There’s nothing like a Western to get people excited.”

Good Westerns don’t have to cost gobs of money. Those Budd Boetticher-Randolph Scott films of the late 1950s and early 1960s—The Tall T, Comanche Station and others—were B movies, but well done. They remain highly watchable and made Randolph Scott a ton of money. Hollywood tends to overproduce these days. Our budget was just under $2 million.

Randy Travis has a Western, like yours an independent feature, coming out this fall. And TNT makes one or two Westerns a year. Is that the Western’s future: independent and cable movies?

There is a crowd of people who support Westerns. In fact, we had talked to Randy Travis about being in our film, but it didn’t work schedule-wise.

But there is an undercurrent of interest in Westerns. They just have to be done right. I really hope the Western can come back, and I think Jericho is the type of film that could do it. It’s just a question of somehow getting it out to the public and getting people to find us.