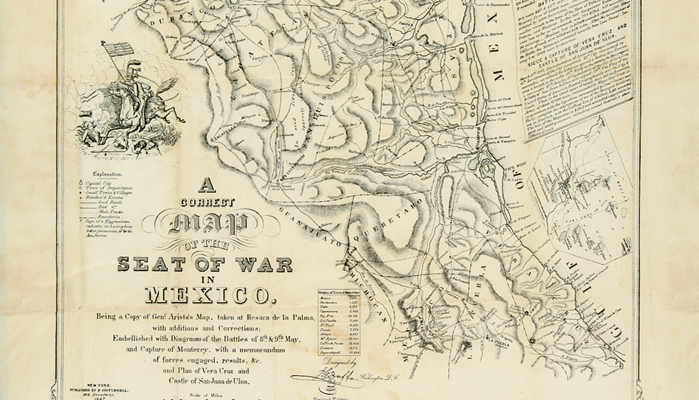 A rare account of the Mexican-American War is found in an extensive archive of Raphael C. Smead, the captain of Company D of the Fourth Artillery. Auctioned by Swann Auction Galleries in New York City on May 12, the archive was the top-selling lot with its $70,000 bid.

“Diaries and letters from the Mexican-American War are far less common than those from the Civil War or other 19th-century American engagements, likely due to the smaller size of the army in the conflict, and the difficulties faced by soldiers in mailing letters and keeping personal objects on the numerous overland marches of the campaign,” says Jeremy Markowitz, the Americana and Autographs specialist at Swann.

Smead’s archive includes over 60 personal letters from Texas and Mexico, and four diaries (dating from 1845 until 1848), which are scholarly detailed, no doubt linked to Smead’s years as assistant professor of Mathematics at West Point. One can almost track the defining points of the Mexican-American War based on Smead’s documents. When President Polk prepared for war by dispatching American forces in the Southwest to Corpus Christi, Texas, Smead was among the soldiers sent. When in March 1846, Brig. Gen. Zachary Taylor led his men from Corpus Christi to set up camp along the Rio Grande, directly across from the Mexican city of Matamoros, Smead was there. (It wasn’t until Mexican cavalry forces clashed at this camp that Congress officially declared war on May 13.) Smead was also at the historic Battle of Palo Alto, as well as the Camp of Investment near Veracruz after Mexicans allowed Gen. Winfield Scott to land unopposed in Veracruz. Smead’s diaries and letters do not include mention of Americans raising a U.S. flag over Mexico City on September 14, 1847, because Smead was in Pennsylvania, recruiting more soldiers for the war. He was back in Mexico in November of that year, but it wouldn’t be long before Nicholas Trist ended the war with the signing of the Treaty of Guadalupe Hidalgo on February 2, 1848. When traveling back home to New Orleans, on board the Robert Parker, Smead contracted yellow fever and died shortly thereafter.

Besides these exemplary documents, the archive also includes Smead’s 1821 diploma from West Point; signed commissions from Presidents John Quincy Adams, Andrew Jackson and James K. Polk; an 1847 battle map; and his death notice. But most important, it contains a sixth-plate, gold-toned daguerreotype portrait of Smead in uniform, taken in 1845, as well as the well-preserved uniform jacket with epaulets, a metal canteen and a pair of Mexican-made spurs.

Swann’s Autographs auction hammered in at a little over half a million dollars.