Arguably the most historic town in Arizona sits in the central highlands, sheltered by forested mountains yet easily accessible to visitors seeking traces of the Wild West. Prescott has the rare distinction of twice being the Territorial capital—from 1864 to 1866, and then again from 1877 until 1889.

“This is where Arizona Territory got started,” says Fred Veil, executive director of Sharlot Hall Museum, named for a pioneer woman who became the Territory’s first historian.

The museum she began in 1928, now considered one of the finest in the state, features the first governor’s mansion, a 2,000-square-foot log home. It still stands on its original site and includes period decorations and furnishings.

Visitors step inside the beautifully tended building and say, “Wait, this is a mansion?” Veil says it qualifies as regal, when compared with the tents and shacks that ordinary settlers lived in, which illustrates his lesson in the hardships of frontier living.

The four-acre campus has three other historic structures: Fort Misery, where settlers met to establish the town, the Bashford House, a stunning 1875 Victorian home that now serves as the museum gift shop, and the Frémont House, home of the fifth territorial governor, John Charles Fremont and his wife, Lily, from 1875 to 1881. The house was built in 1875. Local preservationists prevented its demolition and moved it to the Sharlot Hall campus from downtown Prescott in the early 1970s.

A short walk from the museum brings visitors to downt own’s Courthouse Plaza, home to the stately Yavapai County Courthouse, the charming park surrounding it, and Whiskey Row on Montezuma Street, one of the West’s most famous addresses.

From its start in 1864, the Row has boasted saloons with names like Nifty, Eclipse and Petrified—the latter, we suppose, a description of the condition serious revelers hoped to achieve.

Was Whiskey Row as violent as its legend?

The Palace, with its historic photos and gorgeous cherry-top bar, anchors modern Whiskey Row. Courtney says it opened in 1874 as the Cabinet Saloon and later merged with another bar called the Palace, becoming the Palace we know today.

Little-known Palace fact: U.S. senator from Arizona and 1964 presidential candidate Barry Goldwater once said: “My only regret is that I didn’t buy The Palace when I had the chance.”

The great old stories of the Row still echo…and some of them actually happened.

Here’s one: Two men in a horse-drawn carriage, two more on horseback, chase an outlaw along Montezuma Street while a lone deputized citizen runs after them carrying a Winchester.

The lone man? Virgil Earp. He ended up killing bad man Robert Tullos. Virg lived in Prescott from 1877 to 1879 and later called it “the only place that seems like home.”

In late June and early July, Prescott comes alive for the Frontier Days celebration. The main event is a July 4th rodeo that began in 1888 and today draws some of the country’s finest riders, ropers and racers. Other activities include a parade and dance, specialty acts and livestock demonstrations.

Also on the Plaza, check out the statue of Buckey O’Neill, former Yavapai County sheriff-turned-Rough Rider killed alongside Teddy Roosevelt at San Juan Hill in 1898. The piece was sculpted by Solon Borglum, brother of Mount Rushmore’s designer.

The Phippen Museum, Prescott’s home for cowboy art, keeps Solon’s work on permanent display. A stunning life-sized bronze by Frederic Remington, created in 1895 and titled The Bronc Buster, stands at the Phippen’s entrance.

The Smoki Museum explains the lives of the region’s Native Americans through exhibits, lectures and annual events. The building, built of stone in 1935, resembles a Hopi pueblo. Don’t miss the photos and paintings of Kate Cory, who lived among the Hopis from 1905 to 1912 and served as a consultant on Hollywood Westerns.

After touring the historic sites, don’t bypass the city’s famed downtown antique district; you might just find a little piece of Prescott’s past to take home and remind you of your mile-high adventure into yesteryear. 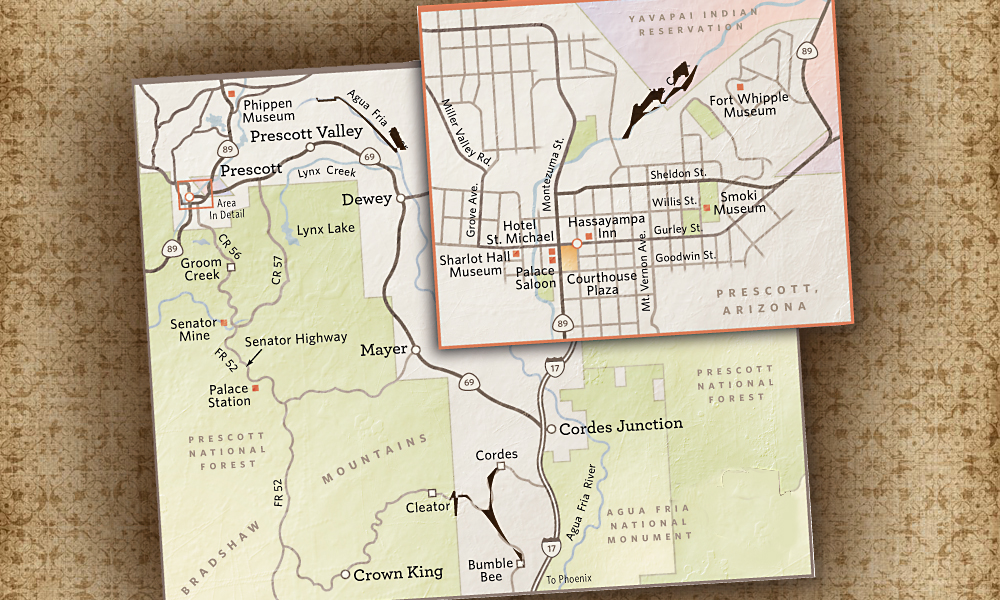