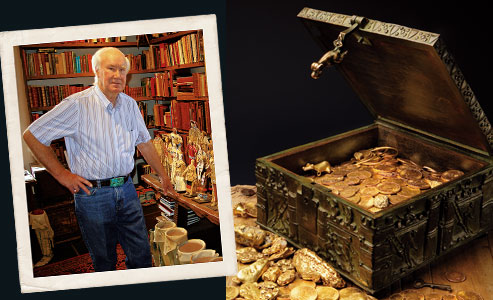 The Hunt is On: We’re the first to publish his map, and he gave us a new clue…

• a specific spot in a river where brown trout swim

• the ranch of one annoyed Mr. Brown

• a historic snowshoe cabin named for Canada’s Davy Crockett, Kootenai Brown, who hung around Glacier National Park, was acquitted of a murder in Montana and later became superintendent of a national park in CanadaOther speculators say that the line in the poem about “where warm waters halt” has to do with:

• The treasure is hidden higher than 5,000 feet above sea level.

• No need to dig up the old outhouses; the treasure is not associated with any structure.

• The treasure is not in a graveyard.

• The treasure is not hidden in Idaho or Utah.

• The treasure is not in Nevada.

• The treasure is hidden over 300 miles west of Toledo, Ohio.

• If you had its coordinates, you would be able to find the treasure.

See the map Fenn has provided True West, on p. 73, allowing us to be the first to publish it. (The map shows Rocky Mountain states, which doesn’t exactly pinpoint the spot.)

For more great stories about unfound treasure click on the link: Paydirt-It’s Still Out There!