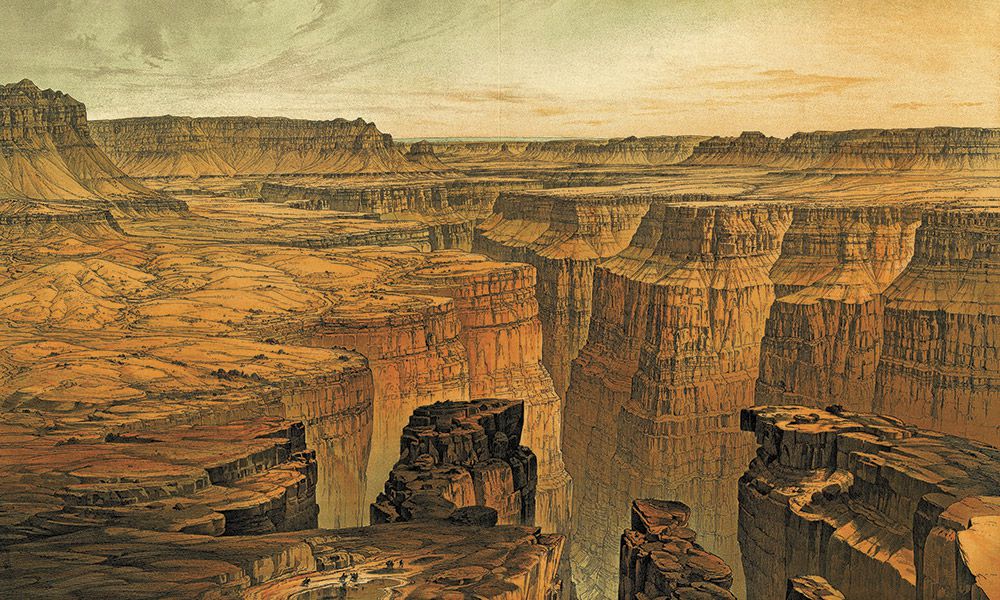 With a blast of the steam whistle, a small steamboat cast off from California’s Fort Yuma during the early days of 1858 to explore the Colorado River. The 54-foot shallow draught riverboat carried exploration personnel under the command of Lt. Joseph Christmas Ives, who was tasked with exploring the navigability of the river toward Utah and its course through the great canyon beyond. The U.S. Army Corps of Topographical Engineers wanted to know if the Colorado River could serve as a military supply route into Utah Territory for troops fighting Mormon insurgents.

Although the Grand Canyon had been discovered by Spanish explorers in 1540, no one had ever brought back a picture of the majestic wonder…until Ives arrived. Two of his scientific employees, Baron Friedrich Wilhelm von Egloffstein and Heinrich Balduin Möllhausen, were talented artists who brought back sketchbooks full of images of the journey. Some of those images appear in the final report of the expedition. After the Civil War, John Wesley Powell would become famous for leading an expedition that fully explored the Grand Canyon.

The report’s pictures were, in some cases, dramatically exaggerated by the lithographers who prepared the roughly-scribbled sketches for reproduction.

After sailing the steamer nearly to the site of Hoover Dam, Ives converted to a pack mule train at the Mohave villages to pursue the overland portion of his study. He camped at Peach Springs on April 1 and then traveled down Peach Springs Canyon (a popular river exit point today) to the bottom of the Grand Canyon.

Here, the first ever inner-canyon views were made, looking upstream, downstream and straight across the river. The men stayed at this Diamond Creek campsite for two days before pushing onto the east.

Crossing the Colorado Plateau, the group arrived at a trailhead leading down to the Havasupai villages in the bottom of Havasu Canyon. Ives camped on the rim about four miles south of today’s Hualapai Hilltop trailhead.

For the next three days, geologists, hydrologists, cartographers, naturalists, botanists and artists spread out to document the canyon. Some hiked down the trail into the canyon, since the mules were unable to negotiate the narrow and precipitous trail, while others explored on top of the rim.

Egloffstein and Möllhausen took many dramatic views at this camp while looking down into the canyon. Several were published in Ives’s Report Upon the Colorado River of the West, which he explored in 1857 and 1858. Published by Congress in 1861, this report brought the first images of the inner gorge of the storied Grand Canyon to the eyes of the public.

As for the purpose of the journey, the U.S. government decided not to send out a naval force into Utah Territory, and the Mormon War became a forgotten chapter in Western history.

In 2012, Harper’s Magazine caused waves among historians by publishing an article about these pictures, proposing that they were not made in modern-day Arizona, but in Colorado. My friend and coresearcher David H. Miller helped Ben Huseman relocate most of the Ives views for Huseman’s book Wild River, Timeless Canyons. Our work showed these lithographs were indeed made in Arizona, mainly at the Grand Canyon, and we took photos in 2013 to prove it.